The hot, muggy summer weather that has recently descended on the city is perfect for spending some quality time with good friends and cold brews. Moving to New York exposed me to a whole new world of beer. With many craft breweries based right here in the city, I’m never more than a few feet from a fantastic local beer, and I’ve tried a lot of beer. Here are a few of my favorites.

I’m in love with most of the beers from Grimm Artisanal Ales. Joe and Lauren Grimm create every recipe in their Gowanus, Brooklyn, apartment before it’s perfected and produced on a larger scale. Action Adventure is by far my favorite of the bunch. It mixes my two favorite styles (sour and smoky) to create something that tastes like everything I want in a beer. Action Adventure is a lichtenhainer, a nearly extinct German style of smoked sour beer. It’s thirst-quenching and tart, with a background of smoky haze — like lemonade at a cook-out.

Named for the original inhabitants of Bridge and Tunnel’s own Maspeth, Queens — the Mespeatches Tribe — this blend is an homage to the beer-drinking Dutch and English settlers that (unfortunately) booted said Mespeatches out of Queens when they arrived. Brewer/owner Rich Castagna cooked up a honey spruce ale, using only ingredients that would have been available to the 1642 colonists. The result is an incredibly unique and tasty session beer, with a side of New York City history.

Also located in Queens — hard to get to on MTA but an incredibly pleasant bike ride from our own Bushwick neighborhood — Finback’s been brewing for the past few years, and their taproom has been up and running since last year. I finally made my way up there this summer and loved pretty much all of the lines, but for a hot July day, I’m going to go with the Sunday Fieldtrips, a light, smooth saison that is incredibly refreshing, and has enough alcohol for you to finish it feeling good.

Other Half All Green Everything, Triple IPA, 10.5% ABV (Carroll Gardens, Brooklyn)

Brooklyn’s Other Half is making some of the most consistently good beers in the city, and I’ve liked pretty much everything of theirs that I’ve tried so far. However, as someone who made her way into craft beer through IPA’s, this Triple IPA feeds my hoppy soul. While I’m more of a saison, sour, and session beer person in the summer, sometimes it’s nice to go back to my roots with a big, resinous, citrusy, but pretty easy drinking beer (just one though, since it clocks in at 10.5% ABV). I highly recommend stopping by their taproom in Carroll Gardens for the in-person, straight-from-the-keg experience. 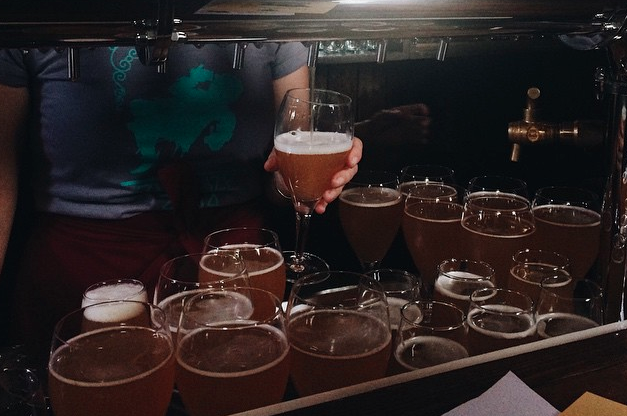 Now these are just four of my favorites. There are countless other awesome beers coming out of the five boroughs and the surrounding area. So if you don’t find what you want here, try another one of the city’s (and it’s environs’) fine establishments: Long Island City’s Transmitter, Bushwick’s own Braven, Astoria’s Singlecut, Red Hook’s Sixpoint, Boerum Hill’s Threes, The Bronx’s Gun Hill, Two Roads of Stratford, Conn., Breweries both Brooklyn and Bronx…there are so many choices. In New York, you’re never more than a train ride away from fantastic beer. Happy Drinking!