The first time I remember taking a train I was 19. My roommate’s grandfather had died that week. They were very close, and she was utterly devastated by the loss, so her boyfriend (at the time, my other best friend) and I decided to go down to Long Island for the funeral, for support. Now it’s true that I may be forgetting some other journey in my youth, and I’m choosing to omit little jaunts on the Conway Scenic Railroad on summer vacations to New Hampshire. But this was the first trip that stuck. I bought a ticket, boarded a big Amtrak snake of steel, and rode it south.

The trip was an emotional one. I was hurting for my friend, searching for a way to make things easier for her, inexperienced in dealing with this kind of all-consuming, world-altering grief. I was lucky at that point; the only major loss I’d personally suffered was that of my paternal grandfather, and I was only 5 at the time, so I was far more traumatized by the sight of my own daddy crying than at the knowledge that I would never see the big man with the deep voice who read me the Cajun Night Before Christmas again. There was something about the permanence of this loss — Christina kept begging, in a broken voice, for the chance to talk to her grandpa just one more time — that hit me like a freight train (no pun intended), the awful forever-ness of it. But despite the emotional toll, the trip also planted the seed of a great source of joy and happiness for me.

I love trains. Don’t get me wrong, I enjoy a great road trip as much as the next person, and I have this thing about airports and cloudscapes and the world spread out in miniature below a 747’s window. But if I had to choose, there’s no question: I would do all of my travelling on rails. I know I’m not alone in this. Scout is also a rabid train devotee, and among the general population trains seem to inspire a romanticism that no other mode of transportation quite does (except for maybe those vessels that fall under the category of “the sea,” but that’s a whole other story, and more to do with the landscape traveled than the vehicle in which one is doing the travelling, I think). A few years ago Amtrak even started offering mobile “residencies.” Writers could apply and, if they were chosen, they would get to crisscross the country for free, round-trip on one of the company’s longest routes, while the rhythm of the rails got their creative juices flowing. In the first round alone, they received over 600 applicants: 24 were chosen. There are songs about trains, and poems, and folktales. And even though the United States lags far behind most of the other continents in terms of train travel, there still seems to be something quintessentially American about rumbling along a track that cuts through small towns and wheat fields, under urban grids and over river deltas. 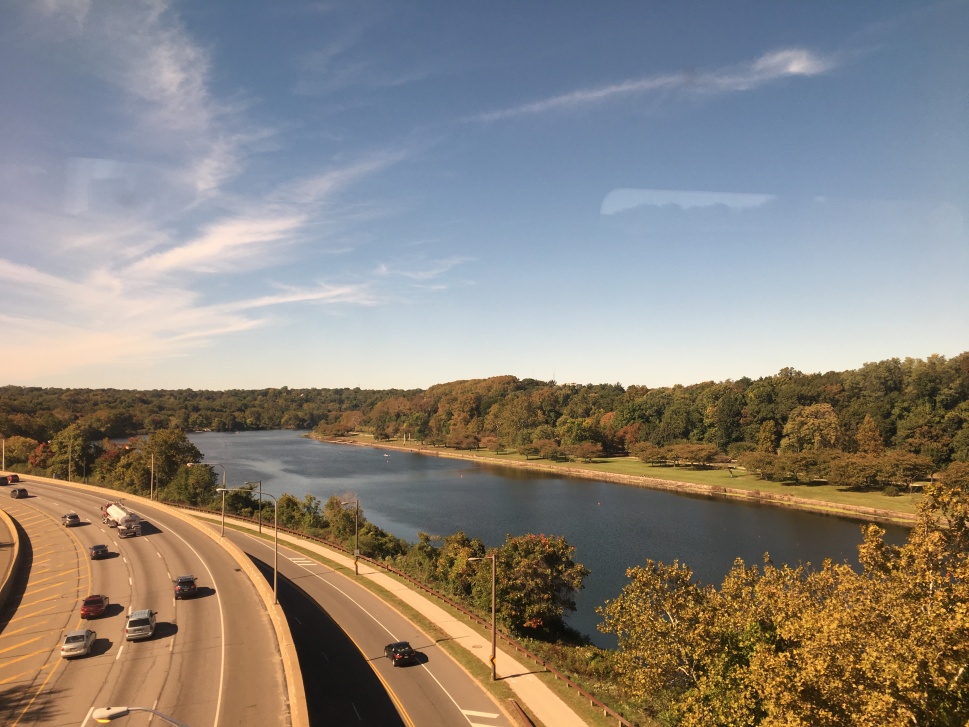 There are of course practical factors that make train travel ideal. It is efficient (if you stay within a certain set of departure points and destinations, particularly when talking about American travel). It requires none of the security rigmarole or early arrival times of air travel. It doesn’t necessitate the focus or engagement that driving does, enabling you to, say, write a blog post while in transit. But I think the true appeal of train travel lies in the bones of the structure itself.

A train travels along a track, on wheels that hug rails, which cut through the landscape in an uninterrupted stream from Point A to Point B. This means two things. One, there is a rhythm to train travel that neither planes nor buses nor automobiles have. It’s even in the name: Toddlers across the country will delight in discussions of choo-choo trains and their chug-a-chug-chug.  The train rocks you, gently, as it propels you forward. It’s why, when Scout and I made this month’s playlist, we dismissed any song without a sense of momentum, of forward motion, of purpose. You can feel it in your bones. Two, a trip by train allows you to see.  Now some people will argue that a car or plane does this too, that by driving you see the road and by flying you get a big picture panorama of the distance traversed. And both of these statements are true. But neither of them let you really see the trees that line the road, the cars that sit in driveways, the geese resting on a lake. Planes go too wide and cars too narrow. But from the window of a train, you can watch the whole coast go by, uninterrupted. You see the landscape transform and, at this time of year, the leaves shift into increasingly violent shades of scarlet and saffron and tangerine.

I went to Washington, D.C., this weekend to visit my sister, after a week that had been, emotionally, a lot. There were many factors to this, many of which are still too fresh or too personal for me to articulate in this space, but suffice it to say that this trip, planned a month ago, turned out to be very timely indeed. Friday afternoon, I boarded my train and found myself a window seat. We burst out of the tunnel into New Jersey, the sun shining defiantly on watery canals and trees just kissed by autumn. And something inside of me started to unclench.

@sadieharlan I'm coming for you!

I am not unhappy in New York the way I was when we started this blog. As a whole, in fact, I have come to love it, to love my life there and especially the people that make it whole.  But not hailing from such a frenzied, urban environment, I do find that my lungs remember how to expand just a little further, my shoulders to ease down that extra fraction, whenever I get out of the hustle and bustle.  And there’s something about the train in particular that pushes me that extra mile. I relax into my speckled teal seat, stare out at the yellow leaves streaming by, feel the chug-a-chug settle into a steady rhythm in my gut, and despite whatever else may be going on, I feel just a little more at peace.

And so I put in my headphones. I hit play on our new autumn playlist, Eva Cassidy and Brandi Carlile and Houndmouth filling my ears. I opened up my laptop. And I began to write.