We drove a lot when I was a kid. Road trips were fairly standard as the highway was often the most efficient mode of transportation for getting to the small town that my grandparents made their home in, or to the tiny island off the coast of South Carolina where we often vacationed. I know as a child I complained from my spot in the back seat, murmuring the dreaded, “Are we there yet?” But I’ve grown to enjoy immensely the feeling of the road beneath my wheels…or under someone else’s wheels that I’ve borrowed, as I no longer have any of my own — such is life in New York.

Summer is the perfect time for a road trip, especially if that road trip means leaving Brooklyn. Summer in the city brings hot sticky days and nights that are not much better, as the stench of hot garbage invades every space. Sounds lovely doesn’t it? Trust me: Stick with your idyllic images of New York in the fall, because New York in the summer is anything but. So sometimes you just need to climb in a friend’s car and escape, and for Zelda and me, the perfect escape is back to our hometown of Louisville.

Road trips hardly ever play out the way we want them to. We’re too often hindered by time or money constraints to really give in to the romantic ideals of just following the road wherever it may take us. But sometimes we can almost get there. We can choose a rough approximate of a route, stop when we feel compelled, and let the journey be the destination. I’ve done this once before. For spring break during  my senior year of college, I foreswore the beach to drive the Blue Ridge Parkway and explore the wonders of the Appalachians with friends, eventually dragging them back to my hometown. It was pretty much everything I wanted. I stood on the Eastern Continental Divide. I saw the sun set over the Blue Ridge Parkway. I even taught a friend to drive a stick.

I found in planning that road trip that the best course of action is to have a few points of interest picked out to guide your route, and then to let the journey do the rest. This summer, I’m taking friends-of-the-blog Jason and Sarah for a grand tour of the old homestead, and since they are among those rare unicorns known as “New Yorkers with cars,” we will be kicking it road trip style. Now I know we won’t have time for the leisurely journey of my dreams (#adultingproblems), but if we  did, this is what it would look like. This is my rough guide to get your road trip from North to South started, from my current home to my always home. Turn on our first-ever playlist, Highway Cruisin’, and join me on the adventure.

When you’re leaving New York, if you live in Brooklyn, I highly recommend you leave via Staten Island over the Verrazano Bridge. The tolls are a bitch, but it’s worth avoiding having to drive anywhere in Manhattan. Plus, the bridge itself is beautiful. If you’ve got at least three people, you can make use of that high-occupancy-vehicle lane and wave goodbye to the non-carpoolers as you speed by them (I especially revelled in this last fall when we left the city around rush hour, and traffic was at an almost standstill). As you cross into New Jersey via the Goethals Bridge (not as picturesque as the Verrazano, but it does the job), we can really get started.

New Jersey should come with an initial snack stop, preferably at Wawa. I learned of the wonder of Wawa from the many Mid-Atlantic dwellers at my college, who constantly sang its praises. It is, unequivocally, the best road trip food stop ever. Cue indie movie shopping montage: Grab a hot sandwich and a cold fountain drink; stock up on sour gummies, salty pretzels, and, if you’re lucky, some Old Bay Chips; and head back to the road, fully ready to appreciate the wonders that await. 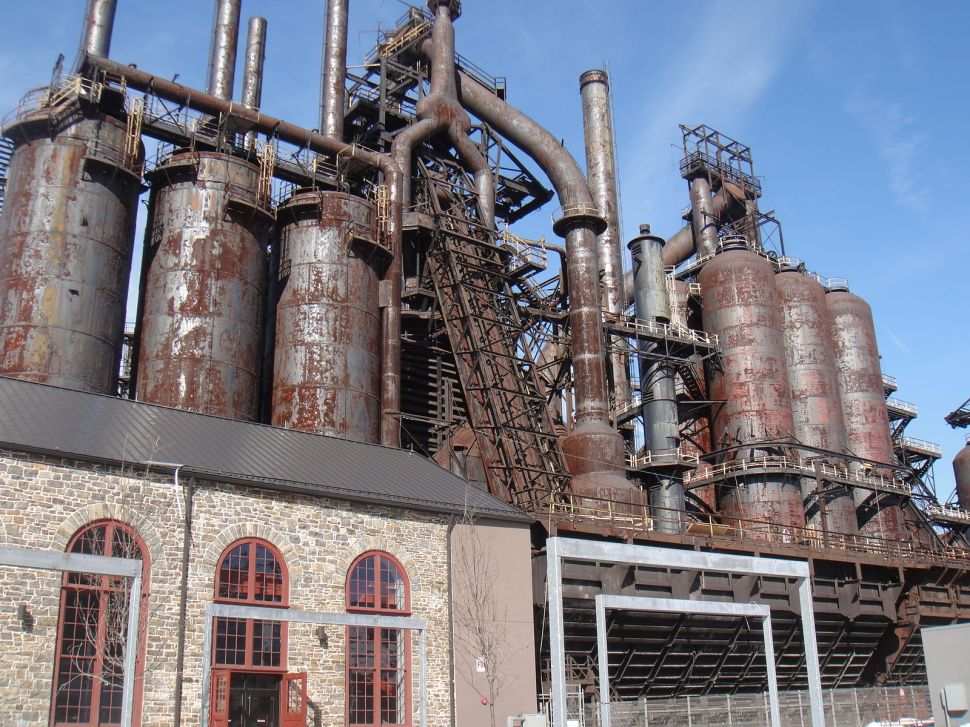 Our first stop is Bethlehem, Pennsylvania — once the center of the American Industrial Revolution and the home of Bethlehem Steel. Fun fact: The Verrazzano Bridge you crossed to leave Brooklyn was constructed from Bethlehem Steel, not to mention many other American landmarks (including but not limited to: the Chrysler Building, Alcatraz, and the Hoover Dam). Bethlehem Steel declared bankruptcy in the early 21st century, and the steel plant has since been turned into a thriving arts and culture district called SteelStacks. The plant’s five tall blast furnaces, now defunct, stand as a backdrop to this new area, which is home to several arts venues as well as a casino. If you show up on a weekend, there’s bound to be something happening, plus it’s a short walk to any number of restaurants and bars in Bethlehem’s South Side. If you’re feeling done for the day, you can stay at the Historic Hotel Bethlehem. It’s supposedly haunted.

If you’re like me, your vacations mostly revolve around which museums you can go to and what historical sites you can see. The history nerd in me will never die, and our second guiding point on this fictional journey is an homage to that. Gettysburg, Pennsylvania, is best known as the site of the Civil War battle that bears its name. The battleground is now part of the Gettysburg National Military Park, and in these times when the NPS is leading our social media rebellion, I feel it’s right to pay a little visit to one of our nation’s hallowed spaces. Plus I’ve wanted to visit since I had to memorize Lincoln’s famous address in the fourth grade.

The Battle of Gettysburg was the deadliest of the whole Civil War in terms of casualties, and President Abraham Lincoln, in his address, originally dedicated the battlefield as the Soldiers’ National Cemetery, four months after the end of the battle. If you’re pressed for time, you can make a stop at the visitor center, get the official map, and take a self-guided tour of the important spots via car (or you can download the map here). If you have a little more time, the site has daily talks and hikes led by park rangers. We here at Zelda and Scout usually opt for the latter; the people who work at places like this usually have an unrestrained amount of passion for the place, and, if you’re lucky, a little bit of theatrical ability as well (Years ago, Zelda and I had a particularly good experience with a Beefeater named Alan at the Tower of London. 10/10 would recommend).

But maybe history’s not your thing, or you just don’t want to spend the day wandering an old battlefield. Just get back in the car and head southwest toward the great state of West Virginia. I have some mixed memories about road trips through West Virginia. The fastest way to get from Louisville to Baltimore (where I attended college) was to cut diagonally through the state, and for a long time it was the bane of my existence: a stretch of 100 or so miles where there was nary a gas station to stop at, or so it seemed. But when you’re not trying to get from point A to point B in the most expedient manner possible, West Virginia really lives up to its state slogan: Wild and Wonderful.

Our next official stop is the greater Huntington area, but it’s a long six hours from Gettysburg to there, so I urge you to give in to your spontaneous road trip heart and stop whenever the spirit moves you along the way. Maybe grab a bite to eat in Morgantown, or pause to enjoy nature at one of the many state parks, or make a pitstop in Weston at the Trans-Allegheny Lunatic Asylum where you can take a paranormal tour — whatever floats your proverbial boat.

Huntington lies on the border of Kentucky and West Virginia, just adjacent to the town of Ashland – close enough that they could be lumped together as one greater metropolitan area (in order to get over my years of ingrained anti-West-Virginia bias, I hang on to that little nugget). West Virginia tends to get a bad rap, but it really does have a lot to offer. Huntington is home to Marshall University, several historic districts, a number of cultural festivals throughout the year, and the internet’s own McElroy Brothers (who’ve done a number on your author’s preconceptions about West Virginia).

If you’re there in July, you might make the West Virginia Hot Dog festival, and in August there’s the Rails and Ales Beer festival. If there’s not a festival of some sort going on, Huntington has eleven public parks equipped with walking trails and footbridges to help you take in the suburban Appalachian scenery. If you’re more of a thrill seeker, you can check out Camden Park and ride the Big Dipper, a wooden roller coaster built in 1958 (I’m more of a log flume girl myself, and they’ve got one of those too!).

Before you head out, stop at Jolly Pirate Donuts to grab some good good snacks to go in their signature treasure chest.

On this final stretch of the trip, the only stops you should make are at distilleries (okay maybe there are a few other stops that might be worthwhile — some scenic overlooks, a cave or two — but you’re reading this blog, so we assume you’re in it for the bourbon). Woodford Reserve, Four Roses, and Buffalo Trace are just off your route, and I know from experience that both tours are well worth a stop. Buffalo Trace is an especially scenic distillery, and the guides there are as passionate about the history as they are about the bourbon. You will learn things, but you will also get to drink (though you do need to drive to your final destination, so drink responsibly).

Take the rest of the drive up I-64 to reach our final destination of Louisville. I’ll save my tips for all the things you can do there for another post — or several  — but in the meantime you can read about some of Zelda’s picks in the New York Times!)

Sometimes a break isn’t about where you go. Sometimes it’s just about taking a second to appreciate the scenery. Don’t just roll those windows down: Actually look at what you may be passing by. And if something strikes your fancy, go ahead and stop for a spell. You’ve got plenty of time.