Many moons ago (ok, not that many), we used to close out our months here on Z&S with a round-up of our favorite things. This included music and movies, things we were eating or drinking or listening to. And it included things we’d read — sometimes books, but mostly articles from around the internet that struck our fancy. I’d keep a running list all month whenever I stumbled across something particularly funny or moving or cool. It was our way of starting a conversation, and, personally, a good way to keep track of some of the best things the Internet had to offer during the past 30 days.

I do not regret our decision to do away with the round-ups; Scout and I are busy, busy ladies, and we’d rather focus our time and efforts on quality versus quantity of posts. But I miss the practice of noting when I read something that struck a chord and sharing it with y’all, our internet kin. And especially these days, when our democracy seems to be in tatters and kids are getting blown up at pop concerts and world leaders are trying out their best Saruman impressions, it’s important to be reminded that not everything is doom and gloom. This can be a particular challenge for me, since my job requires me to spend my days (or rather, nights) inundated by all things news, most of which is far from sunny. So in an effort to salvage my own humanity, and to hopefully bring a little apolitical relief to yours, here are ten of my favorite things I’ve read on the internet of late.

Having fun isn’t hard when you’ve got a library card! And when it comes to building empathy and celebrating the beauty of difference, it’s always best to start ’em young.

“Children love dressing up and being imaginative in what they wear,” Ms. Aimee said. “They see drag queens as people who are doing the same thing, expressing themselves creatively and having fun with it. Also, kids have a much more fluid understanding of gender than most adults do.”

Ginned Up: Canada Recalls Bottles Of Bombay Sapphire For Being Extra-Boozy by Camila Domonoske (NPR)

Nope, this is not the Onion. Apparently your gin and tonic really can be too strong.

A single “unsatisfied customer” tipped them off, returning a bottle because it did not “meet expectations,” Canada’s National Post reports.

We may be 347 days away from the next Derby, but this still tickles me.

Hillbillies Who Code: The Former Miners Out to Put Kentucky on the Tech Map by Cassady Rosenblum (The Guardian)

Speaking of Kentucky, I love this stereotype-busting look at these former coal miners who are looking to turn their fortunes, and those of their fellow Appalachians, around by transforming an economically devastated region into “Silicon Holler.”

The guys at Bitsource also view being a hillbilly is something positive. “A hillbilly is someone who is hard-working, thoughtful, and loyal,” Couch says. “And rugged,” he adds. “Because we’ve seen some tough times.”…“In Pikeville we already moved the mountain,” Justice says. “Nothing really much scares us.” 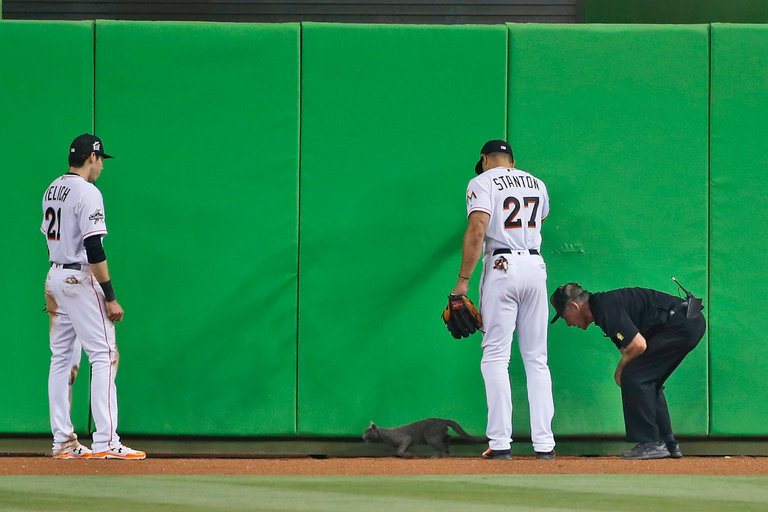 Think Baseball is Boring? Maybe a Cat Will Help by Daniel Victor (The New York Times)

“Look at this cat,” Rich Waltz, a Marlins announcer, beamed on the team’s broadcast. “Terrific stuff by the cat. Outstanding!”

The cat settled itself away from the dirty hands of humans on a gaudy sculpture that lights up, sprays water and does other gaudy things on the occasion of each Marlins home run. It lay down on a portion of the sculpture painted to look like water, but found no tuna or minnows.

As Kathleen Kelly tells us, when you read a book as a child, it becomes a part of your identity in a way no other reading in your whole life does. Anne Shirley, with her sass and her love of books and her absolutely voracious imagination, is an indelible part of mine.

I didn’t read Anne (with an “e” of course) of Green Gables. I devoured Anne of Green Gables. At the time, I didn’t understand why Anne’s commitment to her own intelligence, kindness, and disruptive “red hair” meant so much to me. Why watching Anne sit on a bench and stare toward her beloved best friend Diana Barry’s house, crying “henceforth we must be strangers living side by side,” made my heart soar. Now I realize that she was my first heroine.

Stephen Sondheim and Meryl Streep Side by Side at the Pen Gala by D.T. Max (The New Yorker)

Why does this story exist? I do not know. But it’s a fanciful romp, and I’m delighted to be along for the ride. Also it wins the prize for favorite sentence I’ve read this month (see below).

Out of the gloaming, Streep appeared.

That’s What She Said: #Professional by Anne T. Donahue (newsletter)

I do not know why I was not subscribed to Donahue’s newsletter until this month — she is consistently one of my favorite people on Twitter, and on the internet in general — but this brassy breakdown of how to be a lady boss who writes shit and gets it published is what hooked me. (Speaking of newsletters, are you subscribed to Bim’s? You should be subscribed to Bim’s.)

So first, let’s squash the myth that you need to know a writer to be a writer. I knew zero people who were writers when I started writing. I was in university, it was the summer, I’d had a fight with my Dad (which pushed me over the edge and made me decide to show him ONCE AND FOR ALL), and I worked at American Eagle. So, upset and frustrated with my life, I went to Craigslist and looked up writing jobs and CORRECT: that was a terrible mistake. But my point is, your career beginning does not need to look like somebody else’s career beginnings. There is no right or wrong way to begin writing as a professional person.

Except maybe by working for $2/piece via Craigslist. But I survived! So we did it, everyone. NEXT.

Digging in the Trash by David Joy (Bitter Southerner)

Bitter Southerner is basically who Scout and I want to be when we grow up. Their content is consistently well-written, beautifully produced, and humming with empathy. They never met a stereotype they didn’t try to dispel, nary a bubble they didn’t burst with wit and insight and truth. This is no exception.

We drove there on birthdays and holidays. Past farm ponds colored chocolate milk. Past yellow fields of oat grass that waved and flickered in sunlight like heads of windblown hair. Gravel crunched under tires as we eased along a dirt road just a few minutes from where we lived to the trailer where my grandfather survived.

My Family’s Slave by Alex Tizon (The Atlantic)

Last but not least, this is not a happy story, but it is an important one that will challenge your assumptions about family and love and our responsibility to our fellow human beings.

Her name was Eudocia Tomas Pulido. We called her Lola. She was 4 foot 11, with mocha-brown skin and almond eyes that I can still see looking into mine—my first memory. She was 18 years old when my grandfather gave her to my mother as a gift, and when my family moved to the United States, we brought her with us. No other word but slave encompassed the life she lived. Her days began before everyone else woke and ended after we went to bed. She prepared three meals a day, cleaned the house, waited on my parents, and took care of my four siblings and me. My parents never paid her, and they scolded her constantly. She wasn’t kept in leg irons, but she might as well have been.