Twenty-five strangers walk into a room, where two men stand at a table. One is well-dressed, dapper even, with a fastidiously trimmed beard and a bold choice of colored necktie. He gesticulates freely and frequently, projecting his slight lisp all the way to the back of the fluorescent-lit room. The other wears his rumpled suit like a kid playing dress-up in his dad’s clothes, a flushed face emerging from the starched neck, framed by reading glasses that he keeps pulling out and placing in his mouth in a gesture he clearly thinks makes him appear studious.

A cast of characters is called and asked to arrange themselves in the ten hot seats. The duo at the front takes turns interrogating them, asking about hobbies, friends, jobs, education, histories. The answers come haltingly at first. The dapper one acts as a hype man, sprinkling his speech with “folks” and heavy doses of eye contact and trying to drum up some measure of enthusiasm. The next day, 20 of the 25 return.

On the second day, a shift happens. Slowly, some sort of alchemy in the room shifts. People start talking. Their partner who recently passed away, their brother who spent time in prison, the double homicide they witnessed on a walk home: The stories pour forth. “You folks know me by now,” they say, before launching into intimate details — as if their time together has been more than a handful of hours, as if they are bound together by friendship or collegiality or some sort of team affiliation, rather than civic duty.

In the end, eight are chosen. The rest are sent back into the swirling, muttering mass. And in the very last round, in a buzzer-beater finish to find something workable before calling a new 25, I become Juror Number 5.

I had never gotten jury duty before. My entire knowledge base was largely drawn from Law & Order, 30 Rock, and particularly memorable episode of Veronica Mars. I went in expecting a lot of boredom, a lot of reading time, and maybe a couple days away from the daily news grind. But then I got picked, which meant I had to serve. And to my surprise, I found I genuinely enjoyed it.

Maybe it comes from my love of theatre, or from my writerly bent. There’s a great deal of performativity to court proceedings. It makes for riveting people watching. A cast of characters playing archetypical roles — the judge, the prosecutor, the defense lawyer, the officer, the clerk, the reporter — follows a smooth choreography, weaving in and out of rooms, up and down from seats, raising hands and pointing fingers. There are soliloquies and tense exchanges. Props are introduced. Each show changes up the cast a litte, throwing in a weepy plaintiff or an interpreter for a different twist, but the central Freytag’s Pyramid of it all remains the same. Everything follows a rhythm, chugging along through call-and-response. And in the end, there’s a dramatic reveal, and then the curtain falls and the audience returns to their everyday lives.

But it’s the scenes outside the courtroom — in the backstage area, as it were — that I have found most intriguing. You take eight strangers, all from different walks of life. They have two things in common: They live in Brooklyn, and they received a piece of paper in the mail. You give them a task. And then you watch the tops spin until they fall into a verdict. It’s the set-up for a play, or a murder mystery (although in this case, the drama was entirely civil, not criminal). 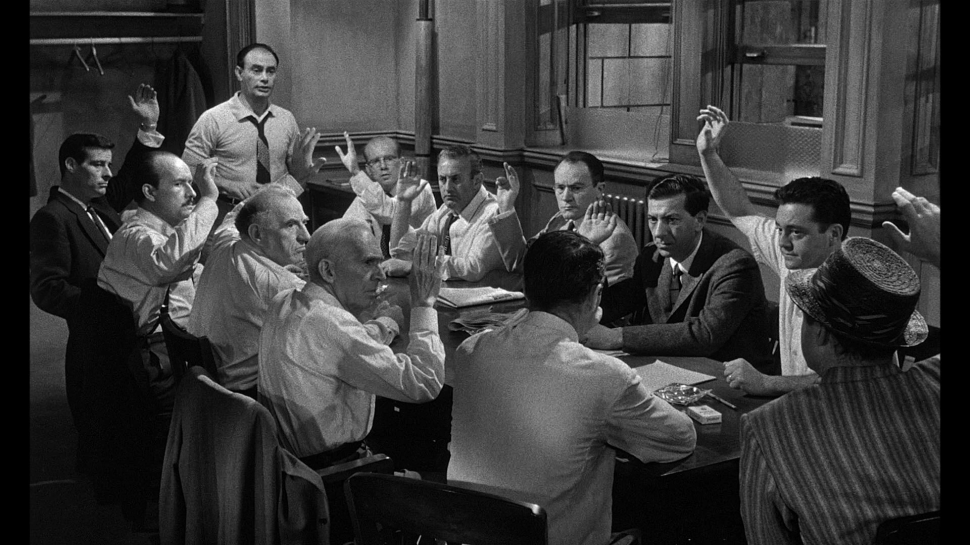 Much like in the voir dire, things unspool over the days. Day one was silent, people scrolling through phones or on laptops. You might exchange a hello, ask to use someone’s charger, comment on the weather. I hope we don’t have to be here long, you’d say. Maybe they’ll settle, someone would reply.

But as the days turn into weeks, that strange alchemy again start to take hold. I think it was the defense lawyer that first did it. They tell you not to discuss the case on your breaks, save it all for deliberation. But his face was just so red and his questions so persistent, hammering one particular word home over and over and over, that something started to disintegrate. It started with a smile, grew into comments. And before we knew it, without even knowing each other’s names, we started to form a bond.

There are a few things I’ve learned will join any group of humans together: complaining, kids in Halloween costumes, subway delays, subway fare hikes, Beyoncé. Bouncing between these topics, personal details started to emerge. One man was the most forthcoming, leaning back in his chair and telling us in a resonant basso profundo about his plans to leave New York in a few weeks and move to North Carolina. His girlfriend passed last month, you see, and it’s just too hard being in the city now. He wants to be closer to his parents, buy a house, use his veteran’s status to travel more. He became the de facto ringmaster, turning the warm spotlight of his attention on each juror in turn and slowly pulling out more and more details. People told him about their kids, their spouses, their time in the service, their jiu jitsu injuries, their sports team affiliations, their favorite restaurants, their 9/11 experiences. And in telling him they told us all, heads drawing closer to a rhetorical campfire. We all wanted to share, it seemed, to draw closer to the camaraderie’s glow. Soon we were exchanging good mornings and good nights with regularity, wishing each other good weekends. One woman brought in a teeming bag of Halloween candy, sparking a debate over the merits or lack thereof of fruity Tootsie Rolls. And as people spun their tales, we started to find points where they had intersected. I ate at the restaurant where you used to work. I used to ride your bus. I think I remember seeing your face, around the neighborhood.

What on paper and in the media is portrayed as mind-numbing drudgery had turned instead into an escape. I found myself looking forward to going in each day: for the escape from news alerts and work email, yes, but also to see my comrades in justice. And we did feel a deep responsibility to do our due diligence, examine all sides, take our time. After all, if the shoe was on the other foot, we would want our jury to take the same care. I’ll admit, part of my relief came from the sudden change in schedule. I’ve worked nights for so long that to suddenly have a whole week of free evenings filled me with exhilaration, even glee. Like a kid let loose in an extracurricular candy store, I threw myself into one nocturnal activity after another: a live journalism show, a musical, a reading, a concert, drinks with friends. And I kept one night to simply curl up in my pajamas, watch Stranger Things, and go to sleep before 3 am. It was bliss.

The trial is winding down, though, and soon I will have to return to reality. I will get back into my routine and these days will seem like a dream, spent in another world where I sat poker-faced in a wood-paneled room, holding a man’s fate in my hands. And where I made seven friends, whose lives would likely have never intersected mine. In a John Hughes roll call, we are a Journalist, a Nurse, a Retiree, a Bus Driver, a Musician, a Graphic Designer, a Hospital Administrator, and an Entrepreneur. We spent a few short weeks in each other’s company, hearing a man’s case and doing our civic duty to render a just verdict. I will miss them, when we are done. I hope our paths cross again.