This article is part of our series “GRITS: Girls Raised in the South,” in which we profile some of our favorite Dixie ladies and the things that make them awesome. Got an idea for a fabulous femme we should feature? Shoot us an email at zeldaandscout@gmail.com! (Alliteration optional.) 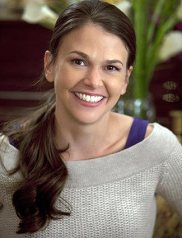 Reasons she’s awesome: Sutton’s been a long-time idol of both Zelda and Scout. Her vivacious stage presence, big belting voice, and easy smile had us hooked from the first time we heard her on the Thoroughly Modern Millie cast album. Born in Statesboro, Georgia, Sutton’s been singing and dancing from a young age — as a kid, she would make up her own arias and sing them in the bathtub — and even though her family had no background in show business, she and her brother (Hunter Foster, equally impressive in his Broadway credentials) both ended up as performers. One of her first roles was a childhood rite of passage — playing the title role in Annie, complete with an anachronistic thick Southern accent. She was hooked, and she hasn’t stopped singing since.

Sutton left high school early to tour with The Will Rogers Follies. She went back to school for one year of college, but ultimately decided to pursue a career in theater full-time. She made her Broadway debut in 1996 as the understudy for Sandy in Grease, followed by more understudy or ensemble roles in The Scarlet Pimpernel, Annie (pulling an Andrea McArdle and playing the star-to-be years after playing the title role), and Les Misérables.

But her big break came in 2000, with a twist straight out of 42nd Street. When the lead in the La Jolla Playhouse tryout of Jeanne Tesori’s new musical Thoroughly Modern Millie dropped out, Sutton was plucked from the chorus to replace her. A relative unknown at the time, she suddenly found herself headlining a $10 million-dollar Broadway production. Needless to say, she killed it, winning a Tony Award for her performance and skyrocketing to stardom. After Millie, she went on to star in Little Women, The Drowsy Chaperone (one of our favorites here at Z&S), Young Frankenstein, Shrek: The Musical, originating her roles in all four. In 2011, her portrayal of Reno Sweeney in the revival of Anything Goes earned her a second Tony. She’s also enjoyed relative success on the small screen in recent years, with lead roles in Amy Sherman-Palladino‘s short-lived Bunheads, and the upcoming NYC-set Younger (debuting at the end of this month).

Sutton’s most recent Broadway venture got her back in touch with her Southern roots, playing the title role in Violet. (We were lucky enough to not only see her outstanding performance but also meet her, and her dog, at the stage door). For this show, Sutton teamed back up with Millie‘s Tesori, and the Bluegrass and folk-infused score fit her like a glove, earning her a leading actress Tony nomination (her 6th). Though she moved to Michigan as a teen, Sutton is still a Southern girl at heart, and this show showcased her deep ties to those Dixie roots, As she herself says, “My entire family is from North Carolina and I was born in Georgia, so I have a very Southern upbringing. I lived there until I was 13 and had the thickest Southern accent you’ve ever heard. My accent sort of went away out of necessity for survival, but I can get it back quickly. All I have to do is call my cousin on the phone, and I’m talking Southern.”

Quintessential quotation: “I can be sassy for a couple hours and then back to sweatpants.”