Here’s the cool thing about New York: It’s old. Maybe not European cathedral old, but as far as the United States goes, it’s practically ancient. Which, if you’re me, is awesome, because I am a giant nerd who loves old things. I spend the majority of my working life in museums, and I have a mile-long list of all the ones I want to visit in the city (there may be too many…). But there are also many places I want to visit that fall under that strange category of “historic site,” “landmark,” or “monument.” Basically, history is everywhere you look in this city, and my goal is to see a reasonable number of statues, plaques, and other memorabilia. Because all would be far too much to ask.

Spurred on by repeated listens to the Hamilton cast album, and by reading the entire bibliography of my favorite author (and fellow lover of historic plaques) Sarah Vowell, I’ve compiled a list of a few statues, places, and plaques I’d like to visit in the near future, just to say I did. Because history is awesome and all around us. Sometimes you just have to look up.

Statue of Edwin Booth, Gramercy Park: I’ve been fascinated with Edwin since I read the aforementioned Sarah Vowell’s book, Assassination Vacation (purchased because I share her strange and perhaps slightly morbid fascination with the history and context of presidential assassinations). Edwin Booth was the older brother of Lincoln’s assassin, the more (in)famous John Wilkes. He was a renowned Shakespearean actor, known for his portrayal of the title role in Hamlet. Namesake of the Booth theater, he was also the founder of The Players Club, which exists to this day in his old home in Gramercy Park. It makes sense then that a statue of him, as Hamlet, was erected in the center of said park. My efforts to see the statue may be all for naught if I can’t find someone with a key: Gramercy is one of only two private parks in New York City (the other is in Sunnyside, Queens).  [Zelda’s Note:  My roomie has the hook-up. I’ve got you covered.]

Hamilton Grange National Memorial, Harlem: Lin-Manuel Miranda did a really good job getting people interested in this oft-forgotten founding father (Still in the dark about the Hamilton fuss? Click here). Since his genius musical started making waves, people like myself have been making pilgrimages to his relocated home in Hamilton Heights (if Alexander was worried about his legacy, clearly his fears have been put to rest). The Grange was the only house that Hamilton ever owned, and though he only lived there during the final two years of his life, it remained in his family for 30 years after his death. Renovated and relocated twice, The Grange now sits at the north end of St. Nicholas Park on 141st Street, for Hamilton/Hamilton fans of all ages to enjoy.

Cleopatra’s Needle, Central Park: This obelisk, one of a trio, is the oldest man-made object in Central Park. It was brought over from Alexandria, Egypt, in 1880, funded by millionaire philanthropist William H. Vanderbilt. Getting the obelisk from Egypt to its new home in Central Park, using 19th century technology, was a huge undertaking. They had to cut a hole in the side of the ship that brought it over, carry the massive piece of rock (it measures 69 feet high and 220 tons) from the East River through the Upper East Side, and then push it with a steam engine over a specially built trestle until it was eventually erected near the Metropolitan Museum of Art. It took them 112 days to move it from the ship to its place in the grass, finally installing it in its current location on February 22, 1881. I find it endlessly fascinating that the New Yorkers of yesteryear would go through such trouble to erect a piece of someone else’s history in their backyard, but they weren’t the only ones. The obelisk’s twin resides in London, and a third, similar one looks over the Place de la Concorde in Paris. 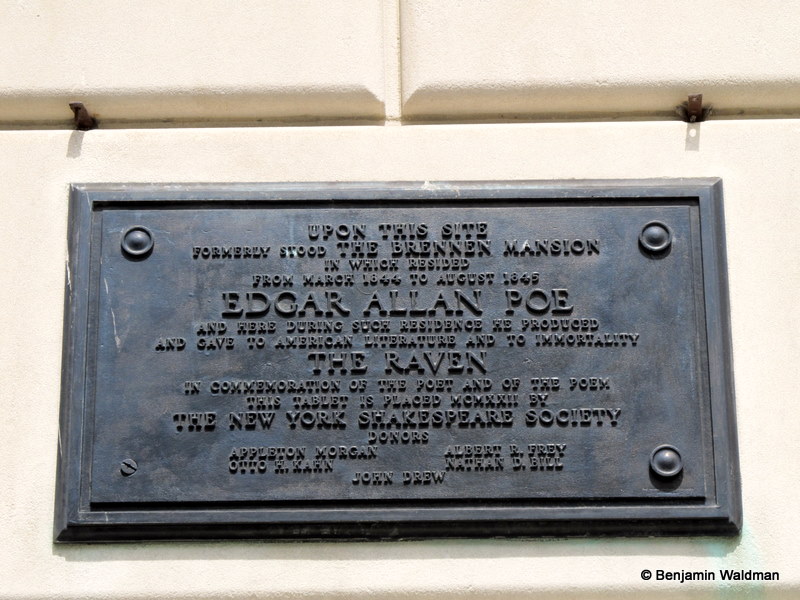 The Raven Plaque(s), Upper West Side: The thing about events that happened many moons ago, their participants long since gone, is that there can often be confusion or conflicting claims down the line about even the most basic details. We know that Edgar Allen Poe, master of macabre and mystery, wrote his narrative poem, “The Raven,” at New York’s Brennen Mansion in 1845. Naturally, it being one of the most famous poems in history, the city decided it deserved a plaque commemorating its creation. Except…there are actually two plaques. It seems there is some conflict over the exact  location of the former Brennen Mansion, so plaques were affixed at two different (though nearby) sites. While I care very little about which is the real place that Poe wrote “The Raven,” I find the fact that there is dispute fascinating. What I love about history is that there are endless ways to look at it, and the dispute over where the great poem was written may say more about the history of the place than the production of the poem itself.

Dr. Alexander J. C. Skene Bust, Grand Army Plaza: Fun fact — there are only two monuments in all of New York City dedicated to physicians, and both of them are in honor of gynecologists (thanks NYT for that little tidbit). The Scottish-born Skene made the bold choice to be educated and start his career in Brooklyn, at a time when no physicians of renown had ever come out of that particular borough. He went on to be a revered and respected doctor and teacher, founding the American Gynecological Society.  His bust sits near the entrance to Prospect Park at Grand Army Plaza. It pleases me that the doctors New York chose to commemorate were those dedicated to women’s health. Next step, more monuments to ACTUAL WOMEN (they’re doing okay, but there can always be more).

Maria Hernandez Park, Bushwick: Speaking of women, and history close to home, my (and Zelda’s former) neighborhood park, always dotted with skateboarders and dominos players, was named for and dedicated to one Maria Hernandez. A longtime resident of the neighborhood, Maria and her husband Carlos were leaders in the struggle against drugs in the area. She was a community leader and organizer of cultural events and block parties, and in August of 1989 she was gunned down in her home for her efforts. The park was renamed in her honor soon after. I walk through the park at least twice a week, and it wasn’t until I sat down to write this piece that I learned who exactly Maria Hernandez was. She was one awesome lady, and I’ll think about her now when I take that diagonal brick-lined path home.

And that, really, is the point here. New York is old, and there is history everywhere. We forget that all those street names mean something and are meant to remind us of some person or some event (Example: New York City has five streets named for the Marquis de Lafayette, one in each borough, AND an additional Lafayette Avenue in Brooklyn). The bronze busts we pass as we walk though parks were real live people that did things, and those things were worth remembering to someone. So next time you come across a plaque, a bust, or a sign, take a second. Read it. See who stood where you are standing now.