With Thanksgiving behind us, it’s officially socially acceptable to spread holiday cheer in all its December glory. But it doesn’t quite feel like the season to be jolly yet, here in the “greatest city in the world” (Full disclosure: I was supposed to write about you’re-living-under-a-rock-if-you-haven’t-heard-of-it-yet Broadway hit Hamilton this week, but I was too overwhelmed by its sheer majesty and found myself unable to string together a coherent sentence on my feelings about it. That said, I will probably make lots of references in future posts. Consider yourselves warned.).

New York these days is rainy and unseasonably warm, as if the weather can’t decide if it wants to be May or December (or neither). Everything is grey, the crisp air that nips at our noses is nowhere to be found, and our breath does not fog out in front of us as we hustle down the street. Add to the wacky weather the world’s being turned upside down by tragedy seemingly every day, and needless to say I and the rest of the city haven’t been feeling very festive of late, despite the influx of seasonal tourists looking for cheer and the Christmas carols pouring from every store. It’s a crazy world out there, and sometimes it seems like it’s just full of pain and violence and humidity. But all the more reason why a little Christmas is just what we need, right this very minute. 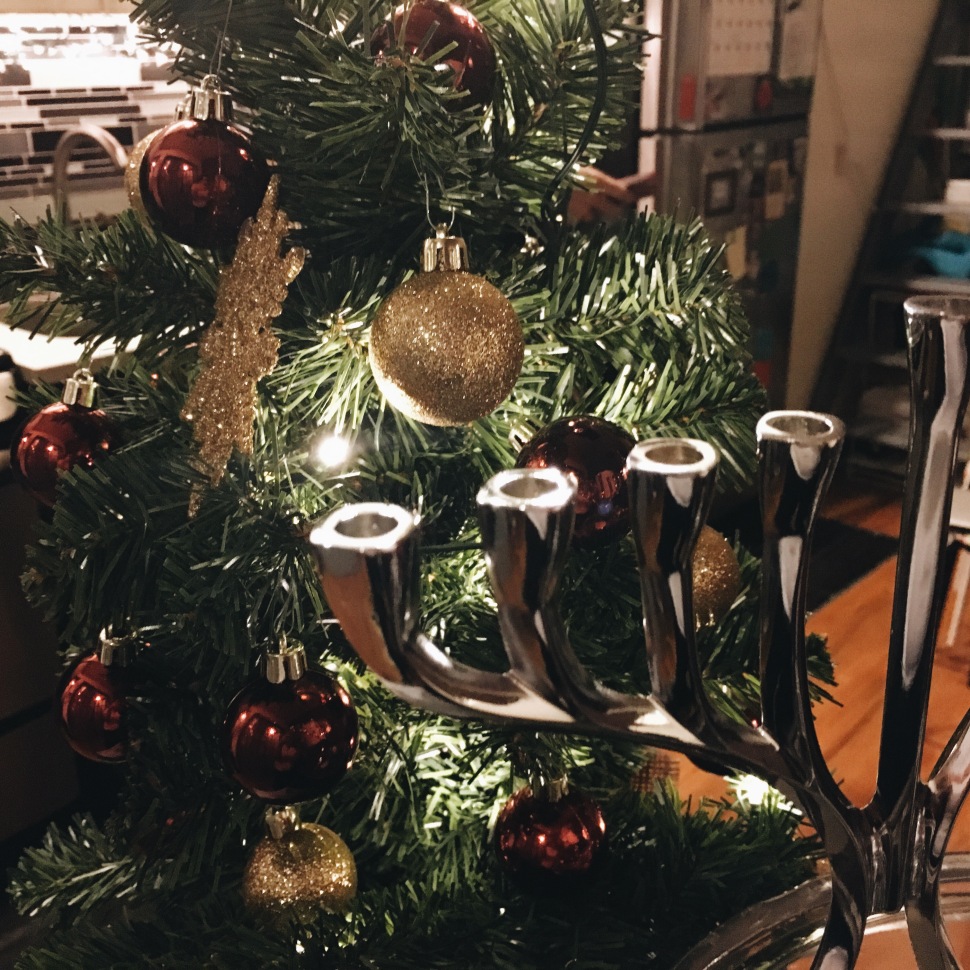 So how do we rectify this early December melancholia? We deck the halls, of course! Or at least deck the apartment, being that we are pretty much sans actual halls around here. On a rainy Wednesday — just as the symbol of all things New York Christmas, the Rockefeller Center tree, was being lit — my roommates and I headed to that supplier of every New Yorker’s needs, Duane Reade, and proceeded to raid their seasonal decorations section.

Now our apartment isn’t exactly spacious, and the little square footage we have already houses four people and their possessions, plus a small dog. But when it comes to festive trappings, we do what we can. Last year, we went for a few strings of lights and some paper snowflakes (Star Wars-themed, because why not). This year we stepped it up a notch and purchased a tiny (fake) tree and matching ornaments, as well as new lights and, of course, we handcrafted more snowflakes (we attempted to find Princess Bride-themed patterns this year to fit the name of our apartment, lovingly dubbed “The Fire Swamp,” but alas it seems that such patterns are inconceivable). We put on some of our holiday favorites in the background (Eight Crazy Nights, Charlie Brown Christmas, A Year Without a Santa Claus), and let our Santa (and Maccabee) flags fly.

There’s something transformative about the holiday decorating process. When I was younger, pulling the boxes marked “Christmas” down from the attic marked the official beginning of this festive season. Decking out the tree holds a particularly dear place in my heart, since it was the one part of the holiday decorating that my mom and I did ourselves (this isn’t to say that the rest of our house was everyday gloom — my mother would hire an interior decorator to adorn our abode with garland and tinsel). The tree was just the Momma and me, listening to Emmylou Harris‘s Light of the Stable as we trimmed the tree. We’d spend the whole day meticulously placing handmade and purchased ornaments on our tannenbaum (a real one when I was little, eventually replaced with an artificial one for convenience reasons when I got older). Every year, we’d uncover some long-lost ornament crafted by my five-year-old fingers and say, “How could I forget making that!”

Apartment decorating has managed to become a tradition as well. Every year that we’ve been in the city, my roommates and I have taken time out of our busy (and rarely overlapping) schedules to be together and get into the spirit of the season. While the adorning of our mini-tree didn’t take nearly as long as my childhood ones (more of an after-dinner venture than a full-on, day-long event), it did have the same transformative power. It flicked that same switch in my brain that says, “Hey! It’s the holidays! Be merry and bright!” This time of year is supposed to be about comfort and joy and goodwill towards men. I feel like we forget that sometimes, overshadowed as it is by the awesomeness of giving and receiving gifts and the general commercialized version of the winter celebrations.

But taking the time to adorn our humble abode with all the trappings of the season helps me take the time to reflect on how lucky I am to be where I am these days. Roof over my head, great roommates, great friends, a job in the field I studied, eighteen different side projects that I love — I’m really lucky to have all that, something I often don’t remember amid the daily grind. And kicking back with the roomies, making garlands and paper snowflakes while the Peanuts characters croon in the background, reminds me just how much I have to be thankful for.