I spend a lot of time in museums ( it helps that I work in two of NYC’s largest). I also have a degree in art history. And thus I feel somewhat qualified to advise you, gentle reader, on what to see in this intimidating city of art. There’s practically a museum on every corner, and in every borough, and I highly encourage you to visit all of them for hours on end. However, I realize that not everybody has time to fit a plethora of museums into their NYC vacation schedule, or their scant days off. I get it: Not everyone has the time or the patience for that.

A few years ago, my mother had roughly two hours to spend in the Louvre (for that museum, two hours is not enough, two days is not enough… I’m not entirely sure that two weeks would be enough). So she asked me, her art history-oriented daughter, to make a list of must-see pieces that she could enjoy while she was there: the quick and dirty guide to the Louvre. She was shocked when my list didn’t include Leonardo DaVinci’s Mona Lisa. I warned her that it wasn’t worth it and she’d just be disappointed; her time would be better spent focusing on the giant room that houses Rubens’ Marie de Medici Cycle (she paid a visit to ole Mona anyway, and was accordingly disappointed).

Seeing the massive amount of art in New York on a weekend trip is a little like attempting to see the Louvre in two hours. So I’m here to distill it for you, down to the must-see pieces. And also to point out the ones that maybe aren’t worth it: Dali’s Persistence of Memory is honestly better in reproduction, I promise. (But if you must, you must, just don’t blame me if you’re disappointed).

Note: Art is a subjective thing. These are my must-see’s based on my personal taste (which is why most of them are from the 19th and 20th centuries), and on art historical importance. Also note that museums often shift which parts of their collections are on view, so some pieces may not always be displayed.

View of Toledo, El Greco (1596 – 1600) – Metropolitan Museum of Art: The oldest work on the list. I love El Greco for his lines, for how far ahead of his time the distortions were. The clouds are my favorite part of this landscape. They seem to convey emotion and mood more than any other artist working at the time.

Demoiselles D’Avignon, Pablo Picasso (1907) – Museum of Modern Art: One of Picasso’s most famous works, and possibly the one that best shows the influence of native African Art on his style. While I prefer the later Three Musicians, this piece is one of the best examples of his quintessential style.

“The Woman in Gold” (Adele Bloch-Bauer I), Gustav Klimt (1907) – Neue Galerie: A work storied in history: Stolen from the original owner by looting Nazis, this painting has had movies, books, and many, many articles written about it. Plus Klimt is one of those artists whose work, in all its gilded detail, is best appreciated in person.

My Egypt, Charles Demuth (1927) – Whitney Museum of American Art: I love this piece. Demuth is painting a simple grain elevator in his Pennsylvania hometown, but he depicts it as grandly as the monuments of ancient Egypt. 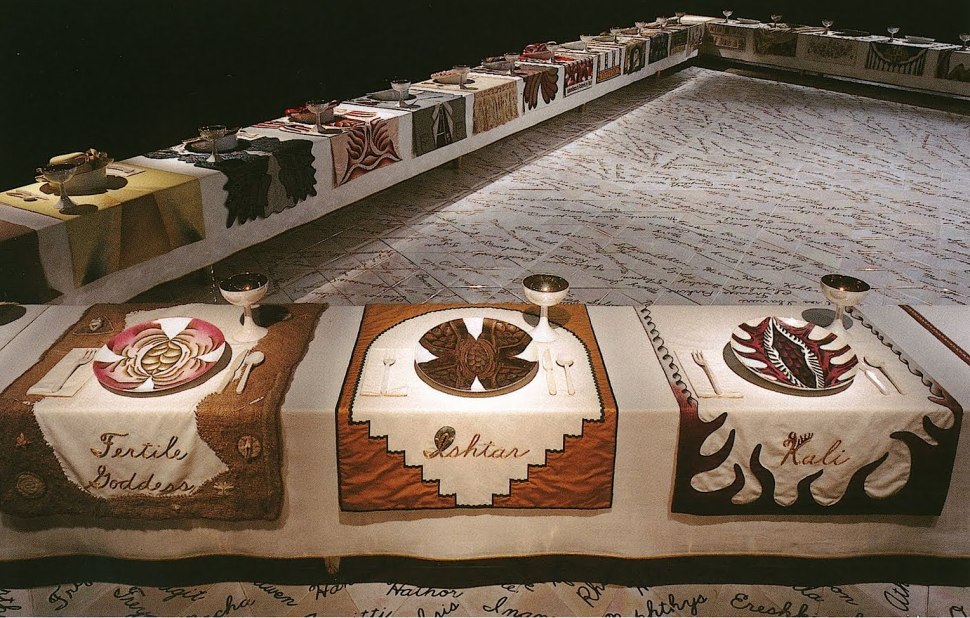 The Dinner Party, Judy Chicago (1979) – Brooklyn Museum: One of the most important pieces of feminist art in existence, this installation traces women’s history in the traditionally female setting of the supper table, with places set for significant figures from across the centuries. The details are my favorite part; I can see it multiple times and always notice something new.

“Portrait of Madame X” (Madame Pierre Gautreau), John Singer Sargent (1883-4)  – Metropolitan Museum of Art: John Singer Sargent is one of the most important artists in the American Art canon. But my favorite thing about this painting? It was considered highly scandalous when it was first painted, because originally the strap of Madame X’s dress was falling off her shoulder. Nineteenth century gasp! 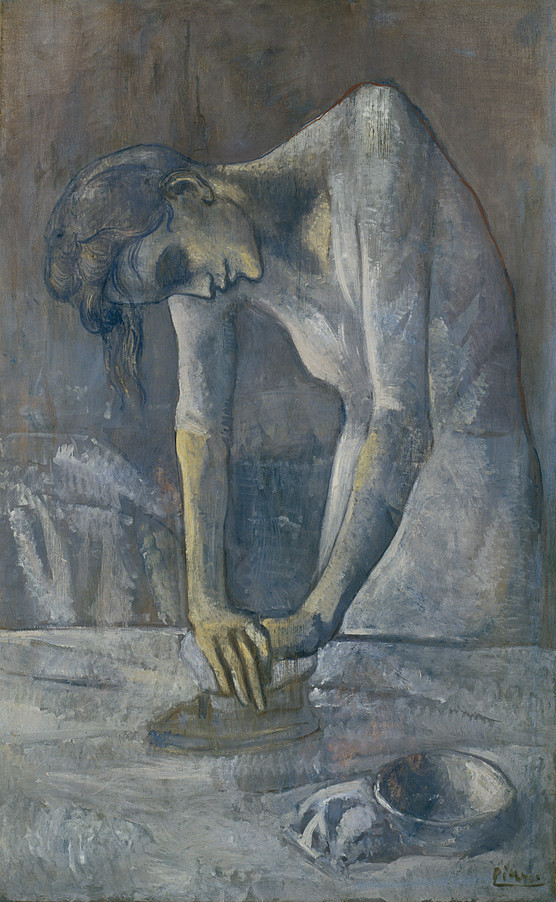 Woman Ironing (La Repasseuse), Pablo Picasso (1904) – Soloman R. Guggenheim Museum:  A far cry from Les Desmoiselles, Picasso produced this painting at the end of his Blue Period. I like this version of Picasso, where his figures have not yet reached the abstraction of Desmoiselles or Guernica, and where the emotion and the effort of the work really shows through. 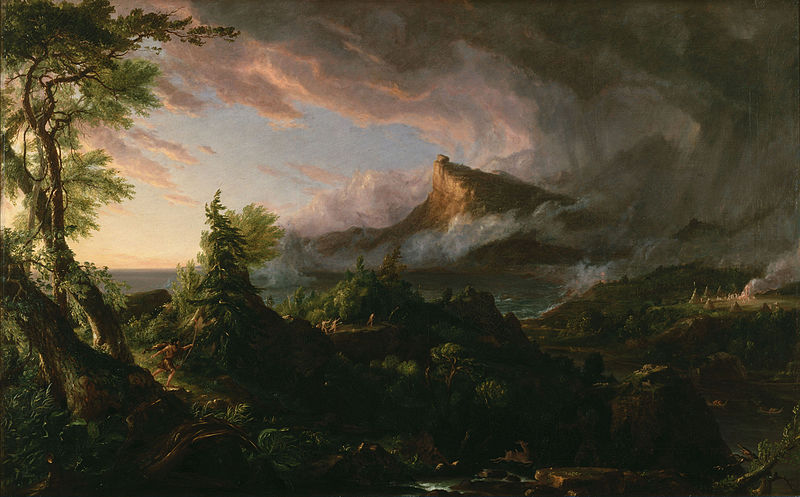 The Savage State from The Course of Empire, Thomas Cole, (1834) – New York Historical Society: I think I have a thing for clouds. I just love the dichotomy in this landscape, the storm about to overtake the unsettled paradise.

A Storm In the Rocky Mountains, Mt. Rosalie, Albert Bierstadt, (1866) – Brooklyn Museum: I may be a little biased when it comes this painting. I stood next to it for seven hours a day, four days a week, for the first three months I worked at the Brooklyn Museum. Also, clouds! 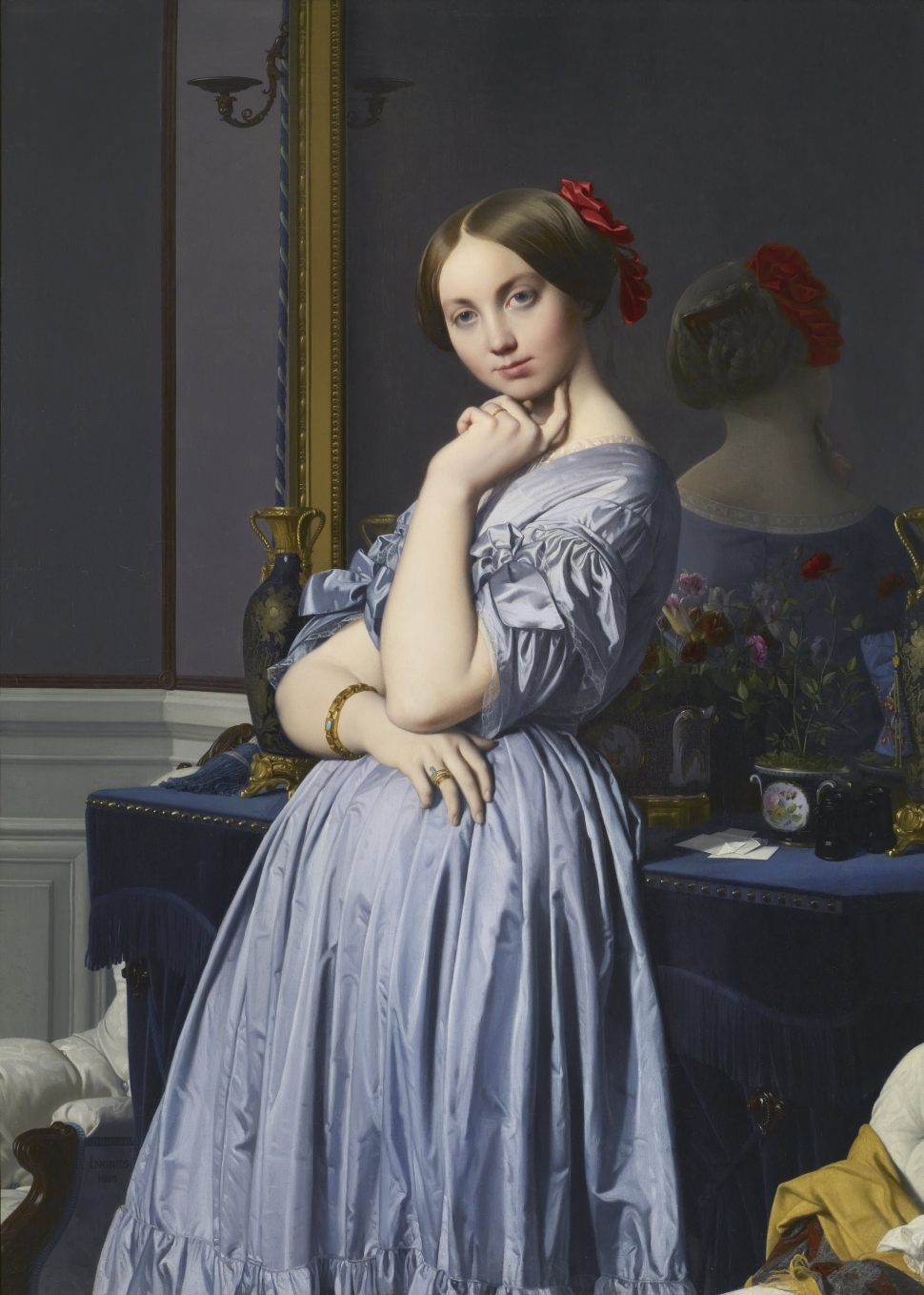 Louise de Broglie, Comtesse d’Haussonville, Jean-Auguste-Dominique Ingres (1845) – The Frick Collection: Ingres’s crisp, bright colors always amaze me, and I love the sort of coy, enigmatic look that the Comtesse is giving the viewer.

Dempsey and Firpo, George Bellows, (1924) – The Whitney Museum of American Art: Bellows is one of my favorite artists, and his inclusion in this list might simply be because of that fact. In this work, he’s taken a common, working-class subject and elevated it to the scale and composition of a grand history painting.

Unique Forms of Continuity in Space, Umberto Boccioni, (1913) – The Museum of Modern Art: One of the foremost artists of the Futurism movement, Boccioni emphasizes movement and dynamism in his sculptures and paintings.

Sunday Morning, Edward Hopper (1930) – The Whitney Museum of American Art: I love Hopper’s stillness, the narrative achieved with so little action. He’ll forever be one of my favorite artists.

So those are my top artworks in New York. Maybe they’re not the most famous, but they’re the ones that make me feel things, and that’s what art should do. Go forth, my friends — the museums await.