Most of Scout’s food-based memories come from one of her grandmothers. So when choosing something to make for this month’s Eat This, Drink That, she looked back on all those memories, running from the car as they pulled up to the old A-frame cabin on the lake and sprinting into the long narrow kitchen to find Gaga cooking something, usually dessert. Often, said dessert, was that light fluffy treat called angel food cake, so that’s what she decided to attempt this month. 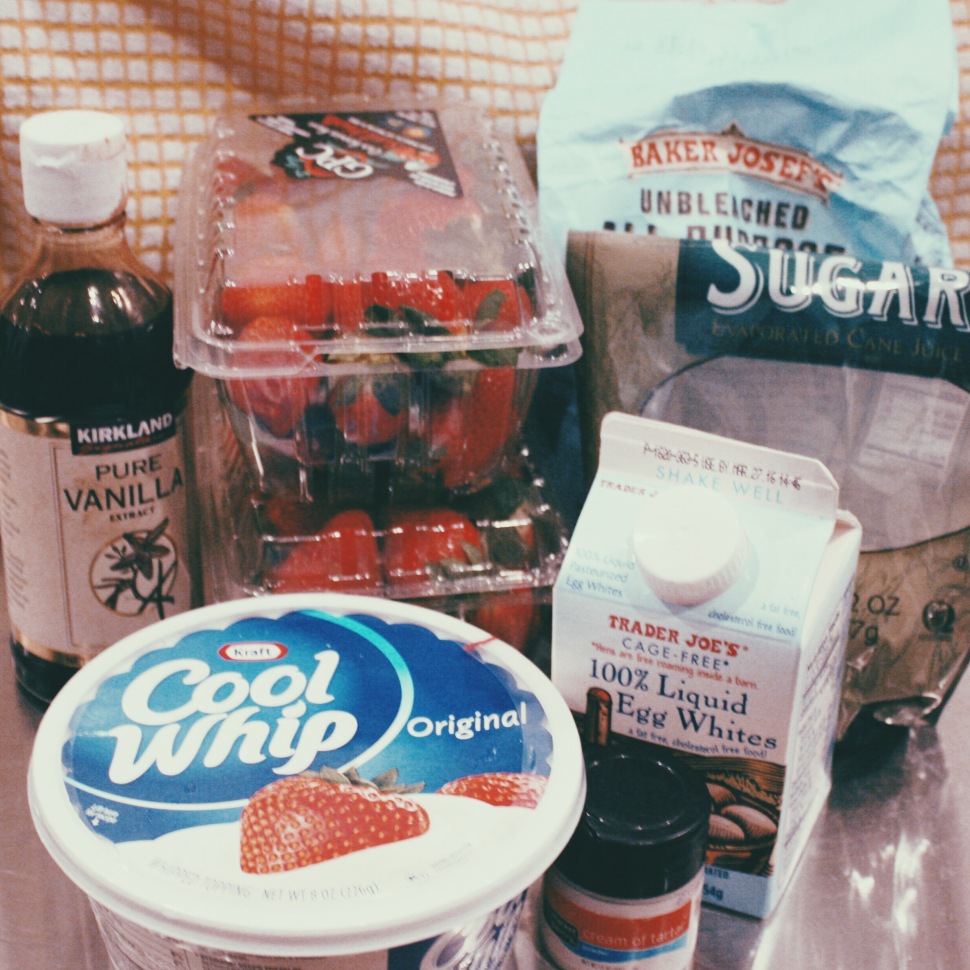 Our adventure had already started rather inauspiciously. We were so gung-ho about angel food that we failed to realize that we didn’t have the correct pan for the cake…and because of the texture the pan is very important. So we did what most twenty somethings do in situations like this: we improvised.

After realizing we weren’t going to be able to MacGyver a pan, we opted to make cupcakes, which would be small enough to hold themselves up without the central support…in searching for cupcake pans Scout found that Zelda owned donut pans, and we intended to make some tiny correctly shaped angel food cakes as well as cupcakes.

So to start, we preheated the 350 degrees, sieved the flour and salt into a bowl and set it aside: then the fun began. Using a KitchenAid mixer we beat the egg whites until foamy. This was Scout’s first adventure with both egg whites and a kitchen aid mixer. The verdict: both are fun and fairly simple to use. After the egg whites have reached prime foaminess, add the cream of tartar and beat until soft peaks form, then, continuing to beat, gradually add sugar. Continue to whip into a frenzy until stiff peaks form and beat in vanilla. Assuming we did all this correctly, our cake should have that fluffy light texture.

Using the sieve again, gradually fold in the salt/flour mixture with a rubber spatula (cutting down the middle and up the sides, while turning the bowl—if your talented, this was slightly difficult for Scout to do all at the same time). Spoon mixture into an ungreased pan and bake for 35-40 minutes, but only if you’re making a whole cake. If you’re making cupcakes like we did, I highly suggest you maybe lightly grease your pan or something and only bake for about 25 minutes, because we spent the final part of the evening scraping each little cake out of the pans (Zelda was understandable worried about her pans. Hopefully they have since recovered).

All in all despite their toughness in coming out of the pans, they tasted pretty good. They followed the Z&S rule of “doesn’t look that pretty, but tastes okay.” We added some strawberries (sliced and sprinkled with some sugar to bring out the juices), and whipped topping of our choice (Cool Whip for Scout, because tradition, and the canned stuff for Zelda), and they looked pretty too. There’s nothing a little (or a lot) or whipped cream can’t fix!

For the cocktails, Zelda wanted to whip up something light and a bit summery, to compliment the fluffy cake and juicy strawberries. In her book, summer means gin and something sparkling, so she decided to tackle the classic French 75.

For this drink, we used Robert Simonson’s recipe, courtesy of the New York Times’s wonderful Cooking repertoire — but with an important twist. Simonson’s recipe calls for a simple syrup, prepared at least an hour before the actual cocktail assemblage so it has time to cool. Given the time constraints of our evening (and Zelda’s procrastination in settling on a drink), we decided a short cut was in order. Bon Appetit, for their large batch French 75, includes instructions for a No-Cook Simple Syrup. Zelda deposited 2 cups of powdered sugar into a jar, added an equal amount of water, and shook until dissolved. Presto syrup! 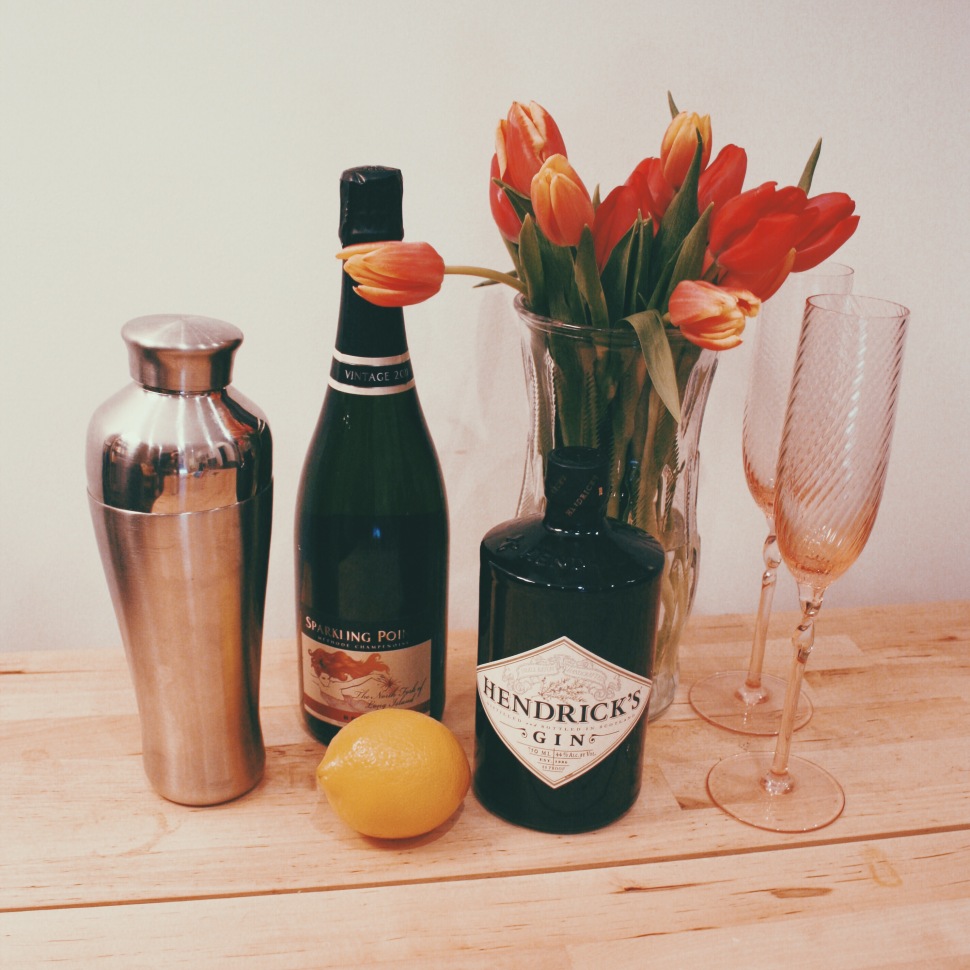 As for the drink itself, it’s as simple as the syrup. To a cocktail shaker filled with ice, add 1 oz of gin, 1/2 oz of fresh-squeezed lemon juice, and 1/2 oz of your syrup. Shake to chill and combine, strain into a champagne flute, and top with the bubbly of your choice (preferably on the drier side). Garnish with a lemon twist, and voilà, you’re good to go.

At least that’s what we thought. But one sip of our (very pretty) drinks revealed that what they had in panache they lacked in actual flavor. Something was missing, and the answer revealed itself in the form of our favorite French cure-all, which makes any drink infinitely more exciting and delicious. Enter St. Germain. 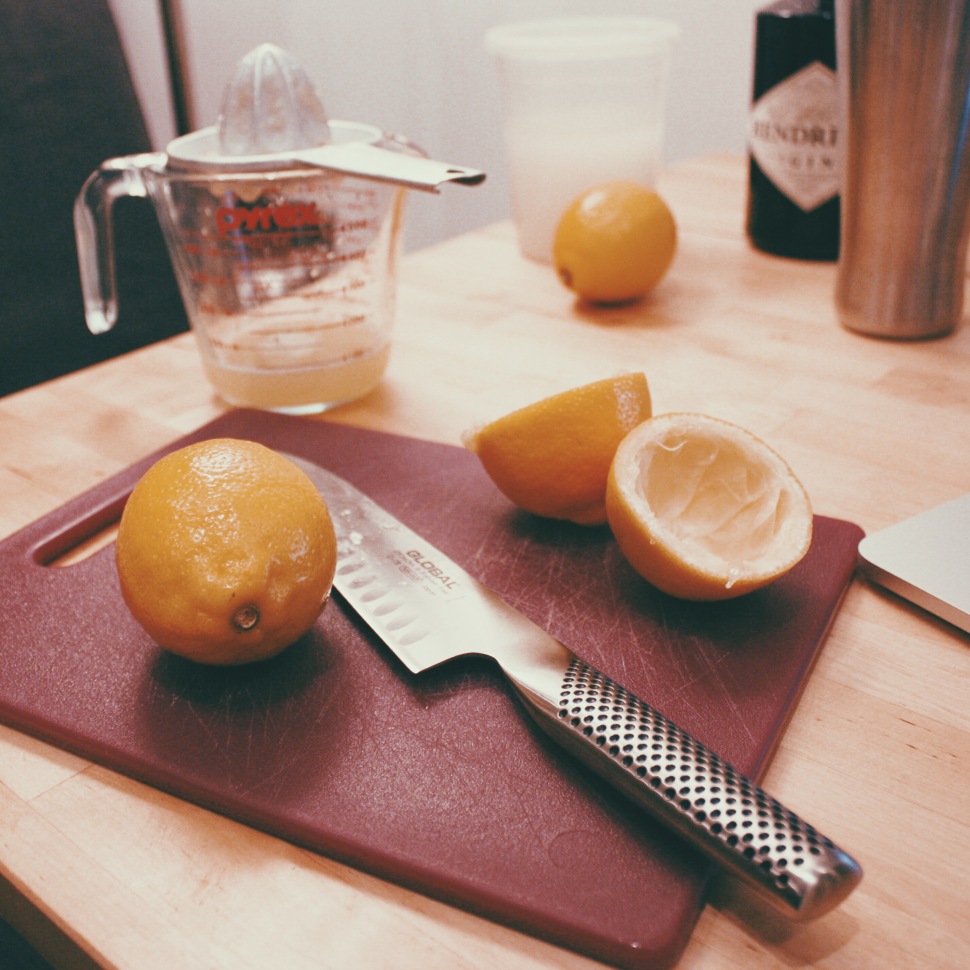 This elderflower liqueur is the wunderkind of the cocktail world, adding just the right note of floral sweetness to any drink, and it pairs particularly well with gin, the flowery notes complimenting the piney-ness (that’s a word, yes?) of the juniper. One dash of this stuff, a quick stir, and we were in business, transported to a summery garden party by the Mississippi, despite the Brooklyn chill outside.

The other lesson learned this week? Both of us suck at cutting lemon twists. Seriously. Must practice so as to impress party guests with our sophistication and flair.