Every year, the English-speaking world waits with bated breath to learn which lucky word has been selected by the Oxford English Dictionary as Word of the Year. The choice is usually representative of the collective zeitgeist, large-scale shifts in the cultural landscape that will change the texture of the human experience for generations to come. In 2005, it was “podcast.” In 2012, it was “gif.” And in 2015, it was…[face with tears of joy emoji]. 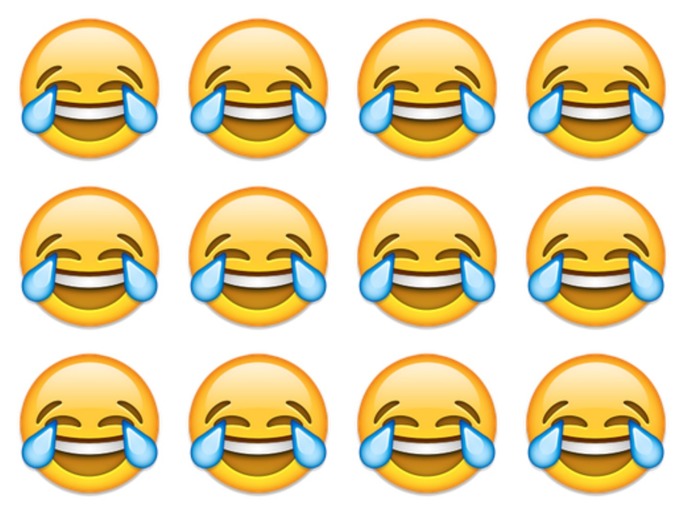 That’s right, the most recent Word of the Year is not, in point of fact, a word, but a cartoon yellow face with its eyes crinkled in mirth, tears bubbling over from its pixelated ducts. The emoji, lingua franca of the 21st century, has become the vocabulary in which the human story is told. You can tell a lot about a person from their oft-used emojis — a thumbs up for the optimist, a smiling pile of shit for the cheeky teen, a flamenco dancer for the greatest people you’ll ever meet. But emojis, like humankind’s ability to communicate and empathize, has its limits. And there is no pain so acutely frustrating as the discovery that the emoji you desire, that little cartoon that will express the truest song of your heart and the very fiber of your soul, is not available on your keyboard.

Now the emoji vernacular is expanding every year (we’ve heard rumors of a bourbon glass, coming soon to your iPhone and immediately to every conversation Zelda and Scout share). And so we’d like to put in some particular requests to the keepers of the cartoon keyboards. One’s emoji choices are personal, and regional, specific to the particular fabric of an individual life. And so these, in Zelda’s humble opinion, are 20 emojis every New Yorker needs. Like, now.

Subway Car: There are three gondolas, two trolleys, seven long-distance trains, and three commuter rails. But none of them are as personal, as ubiquitous to our lives as the MTA. How are we supposed to properly rage against train traffic if we don’t have the right tools?

“Showtime!” Dancer: Like a student during a tornado drill, you know what those cries mean. Time to duck and cover, lest you lose your hat to a rogue sneaker spinning around the pole.

Pizza Rat: He has been a meme, a Halloween costume, and nominee for New York Today’s Person of the Year. Is emoji status next? We think yes.

Bagel and Lox: The New Yorker’s bread and butter. It ain’t worth it, my dear, if it ain’t got that schmear.

Black and White Cookie: Is it a cookie? Is it cake? Whatever it is, it’s delicious, and the rest of America doesn’t know what it’s missing.

To-Go Coffee: Bonus points if it comes in one of those classic, blue and white Greek Anthora designs.

Cash Only Sign: A.K.A. the red eye of doom standing between you and your Diet Coke. It is the obstacle between our brightest dreams and the crushing defeat of reality, as you scrape for change in the linty abyss of your bag.

Brooklyn Hipster: Complete with handlebar mustache, big glasses, and even bigger privilege. Preferably customizable with a rainbow of hair options.

Tourist with Selfie Stick: The bane of every New Yorker’s existence. It used to be the biggest hazard to your commute was being stopped to take pictures of tourists in front of every hot dog truck on your block. Now you could lose an eye.

Pedicab: How do so many of these people exist? Does anyone take them up on their rides? Are their calf muscles spun of steel and magic? So many questions, no cartoon answers.

Standing in Line: The most quintessentially New York of all the items on this list. To live in the city is to wait, always, for something. Sometimes without knowing what it is you’re waiting for.

Shake Shack Milkshake: Maybe this one is just me, but one of the first (and most delicious) New York treats I ever enjoyed was one of these babies, and my love affair with their frozen goodness hasn’t stopped since.

Seamless Delivery Guy: A small army, single-handedly responsible for preventing the mass death by starvation of the majority of the city. Neither snow nor rain nor heat nor gloom of night stays these couriers from the swift delivery of their appointed dumplings. (The same, it should be noted, can not be said of the Brooklyn Postal Service, even if it is THEIR MOTTO).

Chinese Take-Out Box: It feeds us, it sustains us, it hides in the back of our fridge unnoticed for weeks until its contents no longer resemble edible material.

Playbill: There are many parts of living in New York City that we complain about. The theatre scene is not one of them. These are our mementos, our souvenirs of all the times we got off the couch and saw some art. Bonus points if they’re autographed! #stagedoornerds

Hamilton logo: The symbol of all our unachieved hopes and unattainable dreams. At the rate tickets are going, by the time I see the show, current toddler Sebastian Miranda will be following in his father’s footsteps and playing the lead role.

Grocery Cart: I’m not talking about one of those gleaming numbers you see wheeling through the capacious aisles of a suburban Kroger. I’m talking the dinged up, wonky-wheeled, loaded-to-the-gills chariots that get everything from paper towels to Pinot Noir from Key Food to your fourth-floor walk-up.

Chrysler Building: Sure, there are generic skyscraper emojis to be had, but the Chrysler is no ordinary building. It is the prettiest chorus girl in the New York kick line, a shining Art Deco beacon guiding us home.