You’ve probably noticed that we’ve been a bit preoccupied this month, with both the Valentine’s season and the Winter Olympics in Pyeongchang. We would apologize, but we are not ashamed of our enthusiasm (we’ll return to our regularly scheduled program next week, we promise). We’ve been trying to figure out why narratives of romance and sport continue to compel us so much. The romance side I explored a couple weeks ago, but I have yet to figure out exactly why the Olympics are so enthralling for me once every two years. Maybe there’s something about people pushing their bodies to the absolute peak of athleticism. Maybe it’s about the coming together of nations in celebration of something positive. Maybe it’s just about narratives we don’t see every day. The games’ sparse occurrence is ripe for the mining of back story. The characters burst fully formed into our lives, without the long and densely detailed back stories that come with players in more evergreen, mainstream spots. And while it may seem cliché, when it comes to the Olympics winning seams less important than just making it there in the first place (most of the time- — after all, it’s still sports, so winning is still a big deal).

Whatever the reason, every two years, we get invested in these narratives for two and half hot, heavy, obsessive weeks. And when the cauldron is out, maybe we decide to keep up our new fandom, nurturing a newfound love of a weird sport (ICE DANCE 4EVER). But more often than not, the only time we interact with those sports outside the Olympics is when someone decides to fictionalize the high level athletes for dramatic (or comedic) purposes.

Which brings us to sports movies — all the drama of the Olympics, with the added bonus of closure for our favorite characters! Some of them are based-on-a-true-story true; some are just set in the world of elite Olympic sports. All are gripping, thrilling, absolutely captivating. So Hollywood, get out your note pads. Here are a few sport flicks I’d like to see in the long drought between now and summer 2020, inspired by this year’s Olympic Winter Games. [Not Included: the figure skating TV show on the CW or Freeform proposed in this Tumblr post, because YOU KNOW we would be so about that.] Two Woman Advantage: A romantic comedy based on the real life romance these two hockey players, Caroline Ouellette and Julie Chu. One is the former captain of the Canadian Women’s National Team, the other the former captain of the US Women’s National Team. They fell in love and had a kid and are living happily ever after. The world need more lesbian rom coms and more Olympic movies, so why not do ourselves a favor and kill two birds with one adorable stone. Cooler Runnings: The sequel/reboot to what may be one of the best Olympic movies of all time — only this time, it’s about the Jamaican women’s bobsled team. We wouldn’t be mad if it starred Tiffany Haddish as the team goofball and Olympics surperfan Leslie Jones as the long-suffering American coach), with cameos from the original stars.

Swept Off Their Feet: A Cutting Edge-esque rom-com about mixed doubles curling. Two curlers who have, let’s say, intense personalities are kicked off their respective men’s and women’s teams and are forced to team up for their shot at glory on the mixed doubles sheet. They bicker, they fail hard, they learn to respect each other, they start winning, they win it all, they make out. The end. (It’s not unheard of: The Norwegian pair above has been dating since 2012!)

Unified: Personally, I would love to see the story of the Korean Unified Women’s Hockey team. It’s an underdog story, a tale of having to learn to work with unexpected people. And it’s a story that is truly Olympian, because it is about more than just winning: It’s about teamwork and athleticism plus international goodwill, which is what the Olympics are supposed to be about. 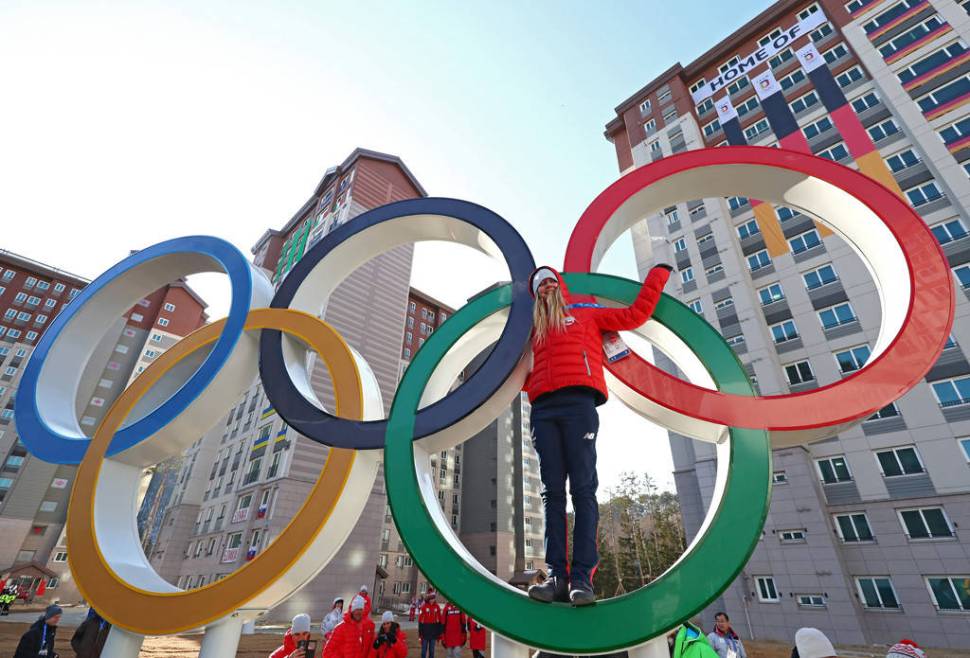 Olympics, We Love You: The Olympic twist on the Love, Actually/Paris, je t’aime/New York, I Love You format the the world has been waiting for. We get ice skaters who have been in love for ages and afraid to admit it to themselves, but now it’s their last Olympics and maybe…cough cough. Meanwhile, their coach is dealing with some family tension as her daughter chooses to compete for her ex-husband’s country instead of hers. Said daughter is newly out as a lesbian and is figuring out her shit while meeting a cute snowboarder. Exes in both sport and in life get paired together to commentate. A veteran speed skater, told he was too old to compete, makes a miraculous comeback thanks to a dedicated coach. And then there’s a storyline about the person who walks around the mayhem in the mascot costume. Adam Rippon probably makes a cameo.