This post is part of our “Required Reading” series, in which we share some of our favorite tales and tomes of New York and the South — classic and contemporary, fiction and nonfiction, short form and long. These are the stories that open our eyes to other walks of life, that shape who we are, and that make us feel at home no matter where we may be. Check out Volumes One and Two for more of Zelda’s favorite tales of the South and New York.

Welcome back to Required Reading! In deciding which books to pick for this post, I started thinking about what it is that defines Southern literature — what sets it apart. I think part of it is the language, a drawling rhythm born of Mississippi currents and August breezes in the Spanish moss. Part of it is, quite literally, the setting, from the Gulf Coast to the Mason-Dixon Line. But for me, I think the thing that gives Southern stories their unique flair is character. There’s something in that humid air that gives rise to a particularly eccentric strand of humanity. The South is often described as being all big hair and big appetites, and I think big personalities get rolled into the same sentiment. From the Boo Radley’s to the Scarlett O’Hara’s, the South is fertile territory for strange folks of all stripes, unapologetic in their quirks.So these are three slices of humanity that cover the spectrum, from brassy to bizarre, and one I can’t wait to dive into. 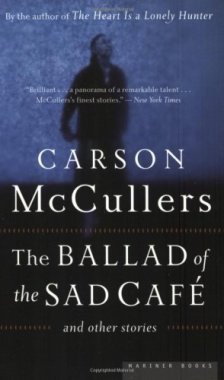 Classic Fiction: The Ballad of the Sad Café

When I Read It: senior year of high school, in my AP English class, sitting next to Scout

Where It Takes Place: an itsy bitsy Georgia town

Why I Love It: “The town itself is dreary; not much is there except the cotton mill, the two-room houses where the workers live, a few peach trees, a church with two colored windows, and a miserable main street only a hundred yards long.” This slim novella was my first introduction to McCullers, one of my all-time favorite Southern writers. The language is lush, the stories achingly sad, but the heart of the tale lies in its characters — the lost souls that occupy this lonesome corner of Georgia. Miss Amelia, the hunchback, Stumpy MacPhail, McCullers excels at taking the overlooked and unobtrusive, dusting them off, and turning them into richly imagined protagonists worthy of our consideration. This is a story about love and what it means to be beloved, “wild, extravagant, and beautiful as the poison lilies of the swamp.” 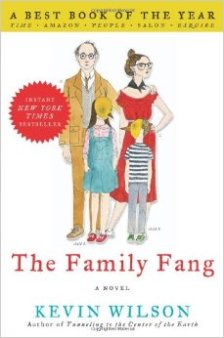 When I Read It: my first winter in New York, in the depths of the Polar Vortex

Where It Takes Place: Tennessee, mostly

Why I Love It: A different kind of eccentric, Wilson’s story of a pair of experimental artists, their offspring, and the tangled web they weave as they blur the lines between performance and experience. On one level, this is a story of twisted family dynamics — between husband and wife, brother and sister, parent and child — and a quirky adventure mystery as Buster and Annie go in search of their missing parents. But it’s also a deeply witty and insightful reflection on what makes something art. It’s funny, and it’s sad, and it’s utterly unlike anything else I’ve ever read. “Mr. and Mrs. Fang called it art. Their children called it mischief.” I call it an imaginative romp that is as thought-provoking as it is delightful.

Non-Fiction: Midnight in the Garden of Good and Evil

When I Read It: the year after I graduated college, in my garret apartment in Paris, homesick for the South

Where It Takes Place: Savannah, Georgia

Why I Love It: “Rule number one: Always stick around for one more drink. That’s when things happen. That’s when you find out everything you want to know.” John Berendt didn’t just stick around for a drink: He stuck around for eight years. A native New Yorker, he immersed himself in Savannah, perhaps the most essentially Southern of the Southern towns — steeped in tradition and history and full of oddballs so strange as to verge on caricature. But every person, every story, each tale taller than the last, is real, the result of nearly a decade of painstaking reporting. On the surface, this is a book about a murder and its consequences for a town that can’t quite decide if it wants to join the current century. But at its heart, this is a story about people: drag queens, gigolos, antiques dealers, society dames, voodoo priestesses, gospel singers, and a whole motley cast of humanity.

Where It Takes Place: largely Alabama, with a dash of Vietnam and France

Why It’s Awesome: I already adore the film version of this tale, and enjoyed the (at times way over-wrought) stage version. But I’m a firm believer in encountering stories in their original media, and so I’m embarrassed to admit I have not yet read Wallace’s Southern saga. From circus workers and misunderstood giants to witches and quarterbacks, Big Fish is bursting with fantastical characters, drawing deeply on the region’s storytelling tradition (particularly when it comes to tall tales). This seems tailor-made for a muggy summer day. I can’t wait.

And An Update: My last post inspired me to revisit From the Mixed-Up Files of Mrs. Basil E. Frankweiler. I’m always anxious about returning to childhood favorites, worried they won’t stack up again my rosy memories in the harsh light of adulthood. To my delight, E.L. Konigsburg’s book did not disappoint. True, some of the more salient details were rather dated (living on $20 in New York for a week? I wish), but the story of Claudia and Jamie and the mysterious angel was just as enchanting as I remembered.