This post is part of our “Required Reading” series, in which we share some of our favorite tales and tomes of New York and the South — classic and contemporary, fiction and nonfiction, short form and long. These are the stories that open our eyes to other walks of life, that shape who we are, and that make us feel at home no matter where we may be. Check out Volumes One, Two, Three, and Four for more of Zelda’s favorite tales of the South and New York.

I want to talk about road trips. Maybe it’s the summer warmth that’s lingering in the September air, but lately I’ve had an itch for a steering wheel in my hand, a sing-along song on the stereo, a breeze through my window, and an open road ahead. Scout and I are both fans of road trips, having undertaken a few (moderate ones) as a twosome, and she’s written of her love of the road narrative on the blog before. There’s something inherently Southern about a road trip — big expanses of highway cutting through rolling hills, roadside stands offering up peaches or peanuts, John Denver serenading you about the country roads that take us home — and there’s something inherently literary about it too. This is our 21st century Odyssey, a hero’s journey battling toll booths and traffic snarls and Cracker Barrel wait times, before returning home a little older, a little dirtier, a little wiser, a little closer to who we are becoming. 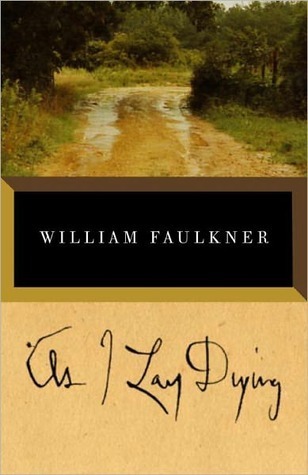 Classic Fiction: As I Lay Dying

When I Read It: in the summer of 2013, during lulls at the coffee shop, while I decompressed from Paris and prepared to take on New York

Where It Takes Place: the fictional, and delightfully named, Yoknapatawpha County, Mississippi

Why I Love It: Let’s get one thing out of the way right off the bat: This is not your average road trip. In fact, there are many who would argue that the Bundren family’s journey by wagon as they prepare to bury their matriarch, Addie, in her hometown of Jefferson, is not a road trip at all. And while it’s true that there is nary a rest stop, car snack, or game of Punch Buggy to be found in this book, it’s also true that the question of family and what it means is inherent both to this masterpiece of Southern Gothic literature, and to any hours-long trek made in obscenely cramped quarters with the half dozen or so people who share your immediate gene pool. This is the story of a family coming together and apart, of the importance of heritage and tradition, and of the things we owe each other even in our brokenness. And it’s all told in the distinctive voice of Faulkner, who more than any other writer, for me, embodies the rhythm and the soul of the South in his every patient sentence.

When I Read It: at some point in college, on Scout’s recommendation

Where It Takes Place: Orlando, one epic day on the road, Agloe, New York, and back down the coast

Why I Love It: This is Scout’s favorite book, in the world, so when she told me I had to read it, I took her at her word. Green’s work often gets written off by those who sneer at tales of teenagers and their “adolescent concerns,” but I would argue that there are few things as universal as figuring out who you are and what you want to do with your life, forging an independent path, learning to imagine other people complexly, valuing friendships, and embracing the moments along the journey rather than the destination. This book is not all road trip, but the road trip is my favorite part. A true classic of the genre, it balances whimsy and urgency, life and death, white-knuckled spins off the highway and the paper heart of romance. And dick jokes.

When I Read It: my first year in New York, in subway cars I pretended were rolling down a highway instead of under the Hudson

Where It Takes Place: all over the United States, on a 13,978 mile journey from Bryson’s hometown of Des Moines up and down the coasts, across the Plains, and back again

Why I Love It: I first fell in love with Bryson through Neither Here nor There, his 1991 travelogue covering his tour through Europe. Bryson has a very particular sense of humor, dry but loving, like an older brother who loves you dearly but has a way of narrowing in on all your absurdities and quirks with laser-beam precision. It’s the heart that you feel when reading The Lost Continent, his very first travel book. He was a seasoned expat at this point, having built a life for himself in England, and the trip was taken in response to the death of his father and as a test run to see if the country that birthed and raised him could ever welcome him back again. Some of the passages reek of a bygone era — had the trip been undertaken today, the book might well have been a blog, with a Twitter and Instagram account where you could follow along with Bill’s journey — which makes the palpable nostalgia of Bryson’s observations even more poignant. He laments the loss of the America of his youth, even as the America he wonders and cringes and scoffs and cheers at has now gone the way of payphones and TripTiks. This is not a specifically Southern story, but it is an American one, and in its Americanness it embodies so many of the things that endear the South to me: eccentric people, everyday wonders, big skies and big hearts and big hair, and really excellent food.

On My Wish List: The Cruise of the Rolling Junk

Where It Takes Place: on the road from Connecticut to Zelda’s home in Alabama

Why It’s Awesome: I am positively baffled, and more than a little concerned, that I did not know this book existed until approximately two weeks ago. Now that I do know it exists, I must read it, and as soon as possible. Originally written as a series for MOTOR Magazine, the book follows a road trip Fitzgerald took with his wife (and the inspiration for my nom de plume on this here blog), Zelda, in a claptrap old car he dubbed “The Rolling Junk.” The book blends fact and fiction, Scott’s vignettes and Zelda’s illustrations. Amazon delivered it yesterday, and I cannot wait to dive in.

And an Update: Guys! Guys. How did it take me so long to read The Amazing Adventures of Kavalier and Clay?! Many friends, whose literary taste I trust and respect, had recommended it over the years, but I kept relegating to my wish list of To Be Read’s. And then one day in July, I picked it up, and I couldn’t put it down until the whole epic whirlwind had come to close. This book, by Michael Chabon, has everything: adventure, romance, bromance, history, comic books, a Golem, magicians, a house in the suburbs and romance at the top of the Empire State Building. It was just delicious, and such fun: It had been a while since I’d gotten swept up in a story like that, and I loved it so much that when I discovered I had forgotten my copy at work the night before I left for New Hampshire, I bought the ebook on Kindle rather than wait a whole week to continue the story. It’s fun, and it’s sweet, and it’s smart, and it made me think about New York and art and what it means to be creative and the value in the work. I cannot recommend it highly enough.