Hot damn, guys, it is officially summer in the city! And with barely a handful of true springtime days to call our own. The sticky heat has descended on the boroughs with a vengeance, prompting us to invest in some seasonal picnic blankets, new sandals, and industrial-strength window fans. Where did this past month go, we ask, and how did we find ourselves sweltering in the June heat? It was a whirlwind, y’all: Derby, weddings, graduations, poetry readings, karaoke nights, rooftop drinks, and oh so many cups of iced coffee. So many festivities packed into so little time, and without much of a respite on the horizon. It’s all good fun though, soaked in sunshine and friendship and rosé. Cheers to summer, y’all. It’s going to be a great one. 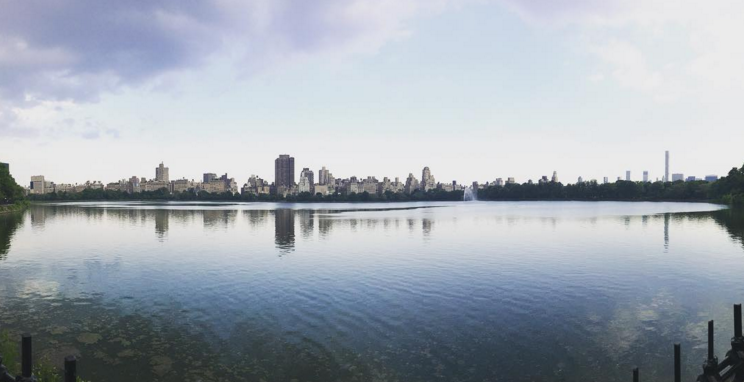 What We’re Doing: This month started off with a bourbon-soaked bang as we celebrated Derby, educating all of y’all (on the internet) and our New York friends (in person) on how to properly get one’s Kentucky on. Scout offered a special something for our gentlemen readers: a dapper style guide for the well-accoutred racetrack-going gentleman. All that partying kicked our asses though — or, more accurately, our immune systems. Luckily, Zelda was ready with some tips for how to make the most of your New York sick day, or at least how to make it not the worst. With June just around the bend, Scout checked in on her 2016 resolutions. And while we neither Ate This nor Drank That, we did go to a wedding, and rounded out the month with a different kind of playlist and some New York inspiration.

What We’re Listening To: This month had us going back, back to our childhood, our adolescence, and the three chicks that got us through it all: Natalie Maines, Emily Robinson, and Martie Maguire, also known as the Dixie Chicks. The tunes of these three Texan ladies helped us through a lot of times, both bad and good, so we paid homage to them in this month’s playlist. And the Dixie Chicks fun isn’t over: We are beyond excited to see them at Madison Square Garden in two weeks (lucky Zelda is seeing them twice!). Also, in a truly momentous landmark in our musical lives, we  finally debuted our version of Monty Python’s “Philosophers’ Drinking Song” at Nerdeoke this past holiday weekend.

We also love: Revisiting old playlists made for this summery weather! Our recent jaunt to the park had us flashing back to June 2015 (Songs to Lounge in Parks By, how apropos), August 2014 (our very first playlist, for nostalgia’s sake), and August 2015 (a playlist for new beginnings to mark the change in the seasons).

What We’re Watching:  Zelda finally got around to sinking her teeth into two of Scout’s absolute favorites this month. First, the incomparable Orphan Black: She now joins the ranks of those of us who believe that Tatiana Maslany must be magic, and we should give her ALL THE AWARDS (seriously, why doesn’t she have an Emmy, someone give her an Emmy). And second, You’re the Worst, the best show on TV that you’re not watching. You should follow her example and catch up on Season’s 1 and 2 before Season 3 comes back around this fall! Scout dove head first into BBC’s The Musketeers — a re-imagining of Alexandre Dumas’s classic. If you like sword fights and period costumes, the entire series just went up on Hulu this month.

We also love: This cover of Beyoncé ’s “Daddy Lessons” by the aforementioned Dixie Chicks. John Green delivering the 2016 Commencement speech at his alma mater, Kenyon College. Speaking of Commencement speeches, our fave Pulitzer-Tony-Grammy-Emmy-MacArthur-winning genius, Lin-Manuel Miranda dropping some wisdom bombs on the graduates at the University of Pennsylvania. And Scout watched all the Star Wars prequels, for the first time, in one sitting. It got ugly.

What We’re Reading: This oral history of the musical that was so formative in theatre education of every lost and mixed up child of the 90s, ourselves included — the 20-year old Rent (Vulture) — and this lovely tribute from one of the folks Jonathan Larson’s music indelibly shaped, Mr. Lin-Manuel Miranda himself (New York Times). This peek inside the oh-so-glamorous Met Ball, through the intensely human eyes of “Humans of New York” photographer Brandon Stanton (Vogue). This chat with Nashville gal and unabashedly proud Southerner Reese Witherspoon about what makes the region so great (New York Times). This fascinating portrait of the girl everybody’s going to be talking about once the Rio Olympics take off, gymnastics powerhouse Simone Biles (New Yorker). This important examination of Asian-American actors and their fight for visibility on screens large and small (New York Times). This interview with Linda Woolverton, the first woman to write an animated feature for Disney and the brain behind such cornerstones of our childhood as Beauty and the Beast and The Lion King (Vanity Fair).  This look at Zelda’s new dream job: professional pie consultant (Bon Appetit). And this gem of a throwback to April, from the tragically soon-to-be-closed Toast: “Sondheim As I Understand Him, From a Woman Who Has Seen About One Cumulative Hour of Sondheim’s Work and Almost Certainly Misunderstood It.”

What We’re Eating: Summer weather in New York brings with it sweaty thighs and unpleasant smells and fragrant armpits uncomfortably close to our faces on the subway. But it also opens up a whole wide realm of outdoor dining possibilities! Our fav George Watsky held a poetry reading meet-up in Central Park last weekend (in anticipation of his leaving New York and of the release of his new essay collection How to Ruin Everything, which you should all check out come June 14th!). We decided to celebrate beforehand with the official opening of our 2016 Picnicking Season. Friend-of-the-blog Katie joined in the fun; chips, brownies, fruit, sandwiches (from Bushwick stalwart and host of many a Z&S writing session, Little Skips), and possibly some illegal beverages were consumed; and a jolly good time was had by all. Here’s to summer, here’s to friendship, here’s to eating outside more! 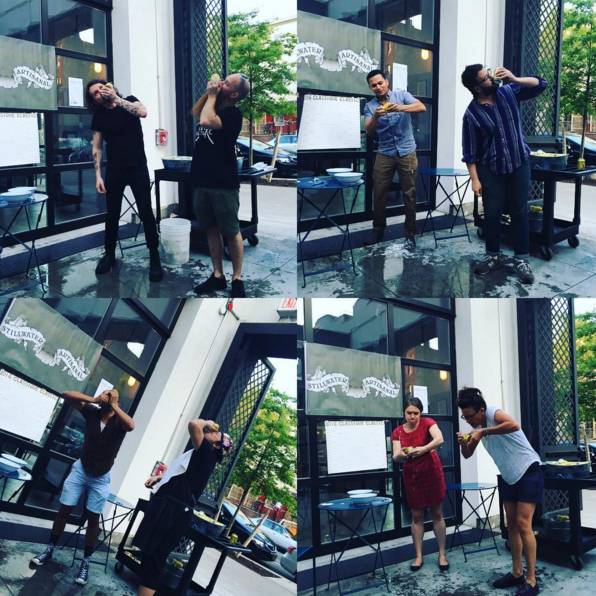 What We’re Drinking: We are all about the Stillwater Classique this month, in honor of Brooklyn’s Inaugural Classique Classic — a Louisville tradition that made its way here all on its own (okay…Scout may have helped…a little bit, but only a little). Scout, as tradition dictates, was out in the first round (Zelda, tragically, had to work, but would have faced a similar fate, she’s sure), but a good time was had by all. Hopefully this is the first of many Classique Classics: It’s the drinking sensation that’s sweeping the nation.

We Also Love: The Freigeist Geisterzug Rhubarb Gose from Shelton Brothers. We partook of this refreshing concoction during our park picnic, and we want more. Good thing it comes in Quince as well.

What’s On Our Wishlist: With the stage adaptation of Waitress making a big splash here in New York, Zelda has her eye on this pie print from Roaring Softly on Etsy — an homage to the story in its original, cinematic form. We both clicked pre-order faster than you can say “pie crust” on the cast album, coming to earbuds near you June 10th. And since summer has finally hit Brooklyn, Scout is lusting after all the tank tops and summer blouses. All of them.