This post is part of our “Required Reading” series, in which we share some of our favorite tales and tomes of New York and the South — classic and contemporary, fiction and nonfiction, short form and long. These are the stories that open our eyes to other walks of life, that shape who we are, and that make us feel at home no matter where we may be. Check out Volumes One through Ten for more of Zelda’s favorite tales of the South and New York.

Hello lovelies, and welcome back to Required Reading! It’s been a while, I know. It’s not that I haven’t been reading lately; on the contrary, the past several months have been filled with tales of wonder and magic and love and loss and cats and nuns and runaway slaves and art history professors. Those tales have spanned the globe (and beyond), from Ireland to Massachusetts, (Red) London to Omaha. But something about that first hint of autumn in the air always pulls me back to New York, and the season here that first tugged at my heartstrings.

New York in the fall is a dream, a brief window of golden light and crisp leaves so idyllic that the phrase cannot be uttered without a wistful sigh. It’s squeezed (more and more each year, it seems) between the sweltering summer and bone-chilling winter, a blink-and-you’ve-missed-it window when everything — the temperature, the sunshine, the leaf-strewn sidewalks, the scarves tied just so — seems to converge to portray the city in its best possible light.

It’s a season of settling and nesting, hunkering down and bundling up. You see friends you haven’t connected with in months, scattered vacation stars reconverging into your social constellation. And it’s a season with a particular flavor: cider doughnuts, hot coffee, pumpkin-flavored everything (unless you’re Scout). It’s no longer too hot to use an oven or stove, and so friends can gather once more around a meal and a glass of something delicious. Mother Nature has given us a feast, wrapped in a crisp breeze and bathed in sunshine. Let’s dig in.

Classic: In the Night Kitchen

When I Read It: somewhere in my youth or childhood

Where It Takes Place: a foodie dream land whose tiled streets and milk bottle towers bear a striking resemblance to a certain metropolis

Why I Love It: Sendak is perhaps better known for his seminal romp “Where the Wild Things Are,” but I have a soft spot for this tale of a boy who, unable to sleep, flies away to the Night Kitchen in a plane made of dough. Sendak was a New Yorker, Brooklyn born and raised, and his childhood among the brownstones and concrete had an indelible impact on his work. Before he came along, children’s literature mainly fell within a certain sanitized, suburban realm, populated by blonde-haired, blue-eyed children with their white picket fences and fluffy dogs. Sendak’s children were scrappy, mischievous, often disobedient — and distinctly dark-eyed brunettes, like himself. And beneath the fantastical adventures and whimsical illustrations lay darker themes: Consider how many of Sendak’s own family members died in the Holocaust, unable to escape as his parents did, and the image of mustachioed men trying to stick a decidedly Semitic-looking child in an oven takes on a much more nefarious tone. The best children’s literature does not gloss over life’s dark corners but prepares kids to confront them, armed with moxie and guts. Sendak’s books paved the way for so many scrappy little troublemakers to come.

When I Read It: in the summer of 2016, on a porch in New Hampshire, enjoying a respite from New York

Where It Takes Place: a microcosm of New York revolving around a restaurant that isn’t explicitly but totally is Union Square Cafe

Why I Love It: I should start with a caveat: Scout and I have polar-opposite opinions on this book. I love the semi-autobiographical account of Tess, a 22-year old girl who moves to New York, gets a job as a back waiter at a famous restaurant, and falls into the strange, intimate orbit of the place’s staff, in particular one oenophile waitress and one self-destructive bartender. Scout most definitely does not. I will concede to her two points: that the narrator is a largely unsympathetic character who makes terrible decisions only partially explained by her youth, and that Simone and Jake (the aforementioned waitress and bartender) are terrible influences with a borderline-incestuous relationship, and Tess would have been far better off had she fallen in with some of the other staff members instead. But what seduced me about this book is the language, particularly the descriptions of food. Danler is an astute observer of flavor, and she excels at translating a glass of wine or an oyster into a rich turn of phrase. And as a former member of the food services industry, I also love the way Danler captures that strange and sudden intimacy that develops when you are in the culinary trenches with people. A restaurant (or in my case, bakery or coffee shop)’s staff is a family whose iron bonds are forged in weird schedules and rude customers and bar mops and spilled coffee grounds and hands pruny with dishwater. The fires of these friendships burn fast and hard, and then just as quickly they’re gone, and the people with whom you once spent the majority of your waking hours are scattered to different establishments or careers or lives. Danler herself cut her teeth in the New York restaurant scene before switching to writing (the book is, as I said, semi-autobiographical), and her deep knowledge of the particular rhythm of these odd little worlds are where the book’s magic lies, occasionally sloppy plotting notwithstanding. 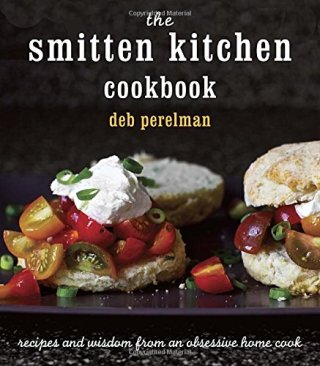 Nonfiction: The Smitten Kitchen Cookbook: Recipes and Wisdom from an Obsessive Home Cook

When I Read It: spring of 2015, although I had been reading her blog for years before that

Where It Takes Place: Perelman’s tiny kitchen in New York City, where she cooks, in her words, “fearlessly”

Why I Love It: Most people might not think of a cookbook as a work of nonfiction, classifying it as more user manual than literature. But Perelman’s recipes are cradled in so many personal stories and wry observations and loving counsel that it becomes so much more than a just a list of ingredients and instructions. The original “Smitten Kitchen,” in which Perelman started her eponymous blog, came in at a decidedly-New York 80 square feet, and her current East Village digs are not much roomier, so all of her recipes have been tiny digs-tested and approved. She writes with wisdom and self-deprecating humor, unpretentious and enthusiastic. Her recipes are sprinkled with stories about her husband and kids, cautionary tales of baking adventures gone wrong, weird cravings that couldn’t be resisted, and colorful experiences from her life in the city. She is obsessed with food — but in a way that’s contagious, not elitist. Smitten Kitchen dishes are the ones you make when you’re home on a crisp fall night and the call of the couch is stronger than that of the bar. There’s nothing better than curling up with a batch of brownie roll-out cookies and a blanket and watching “Hocus Pocus.” It truly makes for a glorious evening.

To read: Blood, Bones, and Butter: The Inadvertent Education of a Reluctant Chef

Where It Takes Place: the kitchens of Hamilton’s life, including but not limited to her adorable East Village restaurant Prune

Why It’s Awesome: It is an unfair truth of the universe that some people are overly blessed with talent, mastering multiple arenas with aplomb while the rest of us struggle to conquer one. In New York circles, Hamilton is best known as the founder of Prune, an intimate East Village joint with beautiful food, delicious cocktails, hot pink bar stools, and a line down the block. I’ve been twice, both times for brunch, and while I normally resist the New York fallacy that if a lot of people are waiting for something that means it must be worth it, Prune is one of the rare exceptions that proves the rule. The space is small but not cramped, the food is creative but not fussy, and for an acclaimed Manhattan restaurant the prices are exceedingly reasonable. So I know Hamilton is a maven in the kitchen. Apparently, she’s a whiz with the pen as well. Her memoir consistently falls on people’s lists of the best food books ever written. It follows her story from the kitchen of her childhood through France, Greece, and Turkey to Prune. The book is full of honesty, humor, and a passion for food, or so I hear. Pair it with a spaghetti carbonara and a bottle of red, and it sounds like just the ticket for a perfect New York fall night.